The Director of Fides Media Ltd, Okpuno, Awka South LGA, Anambra State, Rev Fr Martin Anusi, has commended the new Chairman of the Nigerian Union of Journalists (NUJ), Anambra State Council, Dr Odogwu Emeka Odogwu, for what he describes as the bold step he has taken to turn things around for the better for the Council.

Rev Fr Anusi, who stated this while giving a message of hope at the First Monthly Congress of the NUJ that was chaired by Dr Odogwu, and held at Godwin Ezeemo International Press Centre, Awka, March 3, said Dr Odogwu started off well as the NUJ Chairman.

The Fides Director, who congratulated Odogwu for the brand new bus he attracted from the Anambra State Governor, Dr Willie Obiano, in less than one month after his election, said he was impressed by the new Chairman’s first steps. 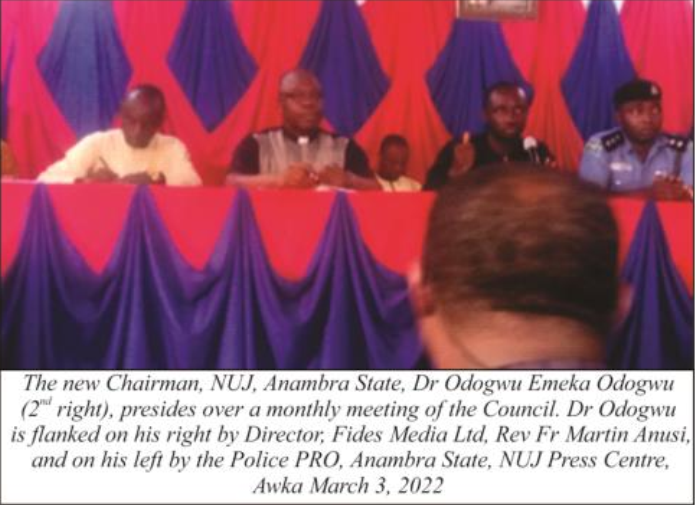 ‘One of the marks of a good leader is that he does not spend his energy fighting yesteryears and yesterdays. Instead, he uses his energy to make things happen. I am impressed with your first line of action. I congratulate you on the new bus which you just attracted to the Council from the Anambra State Governor.

‘I am also impressed with the journalists that made the lists of the committees you just set up, it was an indication that you carried everybody along. You have so far shown the mark of good leadership which every journalist should be proud of. Congratulations, keep that up and do not rest on your oars,’ Fr Anusi told Odogwu.

The Fides boss, who prayed that the good start be sustained, assured the new Chairman of the necessary support to move the NUJ, Anambra State, forward.

He appreciated the members of the 2022 NUJ Credentials Committee, headed by Mr Victor Agusiobo, for what he termed the marvelous conduct of the January 28 Council elections. According to him, the conduct of the elections gave all hope that there were still people in Nigeria who could take up assignments and bring them to fulfilment without fear or favour.

The Catholic priest also congratulated the immediate past Chairman of NUJ, Anambra State Council, Mr Francis Ekpone, for contributing to the entire success of the election. According to him, despite the challenges, Mr Ekpone remained focused and courageous, such that he did not give room for anything that might mar the election process.

Pointing out that the election represented the voice of NUJ, Anambra State Council, Fr Anusi urged all the contestants and members to accept the outcome of the election in good faith and join hands to move the Council forward.

‘Election has come and gone. Any responsible person that saw the turnout of the voters would be able to say that Anambra State journalists had spoken. All contestants should accept the outcome which represented the voice of the entire members of the Council,’ the priest stated.

Earlier in his remarks, the new Chairman of NUJ, Anambra State, Dr Odogwu, appealed to all members not to dwell on the past but to instead, join hands with him to build what he described as a new era for NUJ Anambra State Council.

The Chairman at the Congress inaugurated various committees for the progress of the Council.