Speaking during the Holy Mass, Rev Fr Dr Martin Anusi, Director, Fides Media, who was the homilist, described marriage as a union ordained by God. He advised the couple to understand each other, communicate regularly, make prayer their priority and make Jesus the foundation of their marriage. He added that God should not be seen as a guest but rather the bedrock of the family. 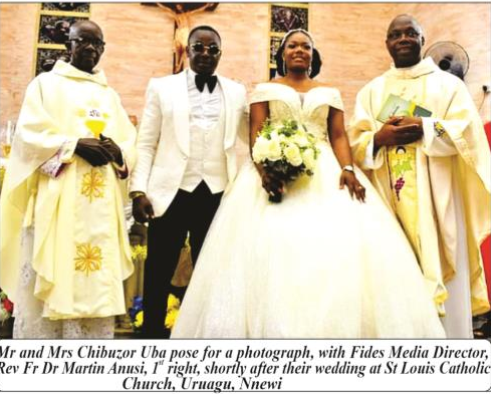 According to the communication don, ‘Each marriage has its peculiarity, and it’s the same everywhere. It depends on how it is being handled, make your marriage to be perfect.’

Fr Anusi urged the newly wedded to be conscious of third party, adding that parents and relations could be allowed to advise but not come into the marriage.

Reacting, Mrs Chibuzor (Nee Okonkwo), while thanking everyone that graced the occasion, prayed for God’s guidance and protection to their respective homes

The Nnewi born bride also expressed thanks to God for successfully wedding her sweetheart.

Fides discovered that the two tied the knot at a simple and yet stylish ceremony.