Joy filled the air at Fidesplex last Thursday, March 4, as the Assistant Editor of Fides Newspaper, Mrs Uche Amunike, celebrated with Fides family, her family, colleagues and friends, on the gift of a new Toyota Camry car from her youngest brother, Mr Nnamdi Udeagha. 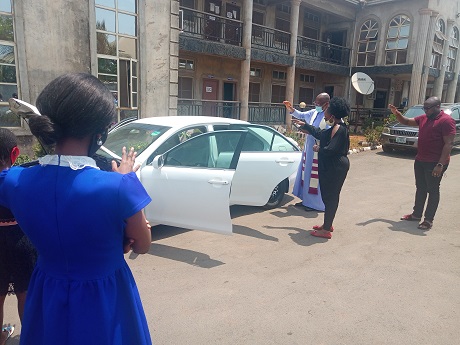 The Director of Fides Media Ltd, Rev Fr Martin Anusi (3rd from right), leading in the blessing of the new car. 2nd from right is the car owner, Mrs Uche Amunike and 1st from right is the donor, Mr Nnamdi Udeagha, FidesPlex, Nodu, Okpuno, March 4, 2021.

For his part, the State Commissioner for Information and Public Enlightenment, Mr C. Don Adinuba, said he came because of his closeness with the celebrant whom he described as diligent and resourceful. He expressed happiness at the gift of the car to her by brother and prayed for better things ahead.

The visibly delighted Mrs Amunike, who described the car as timely, appreciated her brother, Nnamdi, for the gift which she described as huge and surprising. She prayed for God’s continuous blessings on her brother, the family, and all who shared in the joy of the new car with her.

The Editor-in-Chief of Fides Newspaper, Mr Jude Atupulazi, in a vote thanks, said the coming of Adinuba, as well as the Special Adviser to the Governor on Special Duties and Public Orientation, Mrs Ify Obinabo, was akin to the seat of power in Awka relocating to Fides Media. He thanked them for taking out time to come and be part of the celebration; even as he prayed that the new car would be a joy to drive for Mrs Amunike. 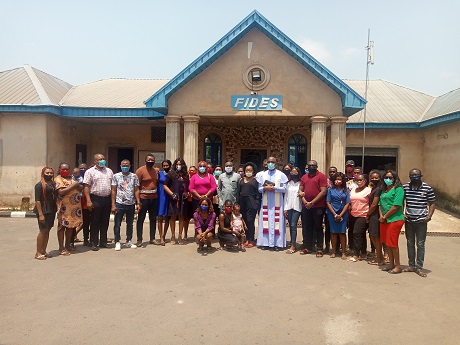 Mrs Uche Amunike, Fides Asst Editor (middle) in a group photograph with colleagues, friends and family, after the blessing of her new car. On her immediate left is Fides Media Director, Fr Martin Anusi; while on her immediate right is the Commissioner for Information and Public Enlightenment, Anambra State, Mr C Don Adinuba, FidesPlex, Nodu, Okpuno, March 4, 2021.