Multiple award winning Fides reporter, Mr Ikeugonna Eleke, has once again won Fides Best Reporter of the Month (FiBROM) award for the month of October.  Eleke’s follow up story on the Anambra EndSARS victims published on October 24-30 fetched him the award.

The award which was received on October 8, 2021, during the monthly meeting of the News and Editorial Department at Bishop Obiefunna Auditorium, Fidesplex, Awka, was announced by the Editor-in-Chief, Mr Jude Atupulazi.

The Editor-in-Chief eulogized the reporter, who, according to him, had shown resilience and steadfastness in picking stories that were of great importance to society; as well as satisfying the journalistic requirement of following up stories. 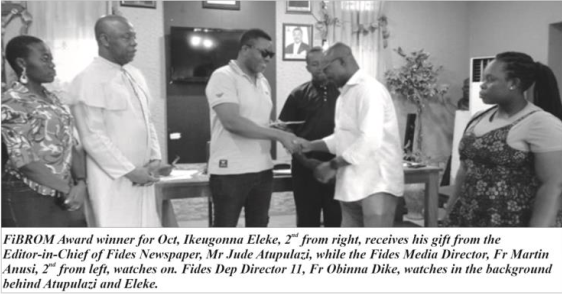 Mr Atupulazi described Eleke’s story, titled, “EndSARS Victims, an Endless Wait for Justice”; written one year after the state government had set a panel of enquiry to resuscitate justice, as timely and professionally done.

His words: ‘It is not just to write a story but to have a follow up to the story. This is what has distinguished your story. Your ability to follow up on this story which needs attention has made you outstanding.’

Mr Atupulazi who also praised Eleke on his writing skills, charged young reporters to emulate him and read his stories to better their reportage.

For his part, the award recipient thanked the Editor-in-Chief for finding him worthy for the award, while recalling his early years in journalism, which, he said, helped in nurturing him and making him what he had become.

The FiBROM award winner urged cub reporters to make their stories captivating to attract and sustain readership, noting that it was one sure way of making it to the top in the profession.

His words: ‘In writing, a lot of things are put into consideration: how lucidly one writes and illustrates stories, the ability to make stories go in sequence to make them captivating, among others, make stories to stand out.’

It will be recalled that Mr Eleke also won the FiBROM award for the month of September.