The State Programme Coordinator, FGN IFAD VCDP, Mr. Nnamdi Agwuncha announced this during a one-day training on operations and management of borehole-water systems and schemes, organized by the state coordination office of the FGN IFAD VCDP in Awka, with Water Users Association from the eight participating council areas in attendance.

The three boreholes, which will be sited at Ubuluisizor in Ihiala Local Government area, Afor Market Atani, Ogbaru Council Area and Ihite Community, in Orumba South Council Area, will bring to total, twenty-four boreholes in the eight participating council areas of Anambra State. 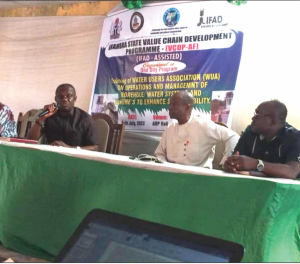 Mr. Agwuncha, who noted that the training was aimed at enhancing sustainability, charged participants not to  neglect any government project sited in their communities but instead, take full ownership for sustainability.

The Programme Manager, Agricultural Development Programm, ADP, Ministry of Agriculture, Awka, Mr. Jude Nwankwor, charged them to provide maximum security for all the facilities sited in their domain to qualify for more interventions.

The keynote speaker, Associate Professor Akaolisa Ezeagu, identified Facility Management as very critical because according to him, it bothers on three key issues of cost, functionality and durability.

The State Irrigation Engineer, FGN IFAD VCDP, Mr. Martins Ugochukwu, noted that the training targets to build the capacity of farmers and beneficiaries of water facilities for them to be able to operate, maintain and sustain the project, urging them to step down the knowledge garnered for more multiplier effects.

Consultants, Mr. Joseph Onugha, Mr. Cletus Nwafor and Mr. Amarachi Ifeduba in their separate lectures, described portable water as critical in Agricultural Value Chain and appealed to donor agencies and intervention programmes to desist from citing their projects on same location in same community but decentralize it for accessibility.