The Federal Government has officially flagged-off the enrolment of Corps Members into the National Health Insurance Scheme.

The Minister for Youth and Sports Development, Mr Sunday Dare at the official flag-off last Wednesday in Abuja said the enrolment demonstrated government’s commitment to the health care needs of young Nigerians.

He said Corps Members across the nation, in large numbers, played critical roles in national development, hence, they could not be ignored.

‘To this end, no amount of resources will be too much to be put at their disposal as Corps Members, and as patriotic Nigerians”, Dare said.

The Minister said the NHIS was launched in 2005 and Nigerians in the private and public sectors of the economy have benefitted from the initiative.

He added that the gesture of enrolling Corps members in NHIS was in appreciation of the invaluable contributions of the NYSC Scheme to the unity and development of the country.

‘It is also a clear testimony of government’s desire to improve the lives of youths who are the hope of a prosperous and united Nigeria’, the Minister said.

He urged Corps Members to be more patriotic to offer greater services to the nation.

‘Several of your programmes have been tailored towards better service delivery. 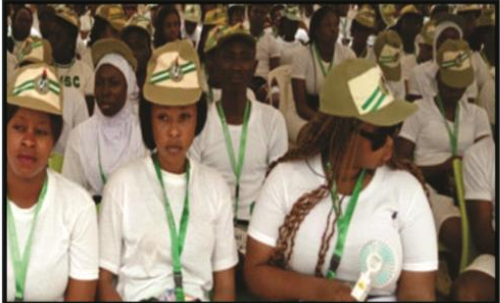 ‘In particular, l wish to laud the enormous contributions of Corps Members to effective healthcare delivery in Nigera.

‘They have been part of the driving force in rendering rural health services where they have made great impact and also in HIRD and your patriotic contributions in the wake of COVID-19 pandemic’,  Dare said.

He specially commended the leading roles of Corps Members in the production and distribution of non-pharmaceuticals materials to Nigerians at the outset of COVID-19 pandemic.

He urged them to keep up the good work, strive and justify the confidence reposed in them by the Nigerian people.

The Minister promised that the Federal Ministry of Youth and Sports Development would continue to support the noble initiatives brought forward for the overall success of the NYSC Scheme.

Reacting, NYSC Director-General, Major General Shuaibu Ibrahim said the official flag-off was a landmark achievement and a watershed in the annals of the National Youth Service Corps.

He said a robust and sustainable health care system for Corps Members had always been of paramount importance to successive Managements of the Scheme, adding that their enrolment would be a big morale booster for them.

‘Today’s event is the culmination of the Presidential directive issued in 2016, which arose as a result of the unfortunate deaths of three Corps Members deployed to Kano, Zamfara and Bayelsa States Orientation Camps.

‘The loss of any Corps Member as it were, provokes sadness in us, leaving the Scheme highly diminished.

‘Corps Members, who represent the most critical part of our demography-the youths, are the leaders and builders of tomorrow.

‘Consequently, any government policy aimed at uplifting this group is akin to building the future of our dear country, Nigeria’, he said.

General Ibrahim added that ‘it is fulfilling that the enrolment of Corps Members into the Health Insurance Scheme is in line with the policy thrust’ of his administration bordering on the improvement of welfare and security of Corps Members and Staff.

‘This health initiative, known as NYSC Group Individual Family Social Health Insurance Programme, (GIFSHIP) has been designed as a holistic health insurance scheme, covering the periods of Pre-Orientation, that is, as soon as a Prospective Corps Member picks up Call-up Letter, which is the instrument that qualifies him/her for admittance into National Service, until the end of his/her terminal leave, which is three weeks after disengagement from Service’, the DG said.

General lbrahim stated further that for effective implementation of the scheme, six Health Maintenance Organizations (HMOS) had been carefully selected after a competitive process for each of the six geo-political zones to drive the process.

He said in order to ensure a seamless arrangement devoid of encumbrances, Corps Members were expected to register under Health Care Practitioners in their localities, while he appealed to both the HMOs and Health Care Providers to “approach this insurance scheme with the highest degree of responsibility and integrity.’

The Director-General added that NYSC Management would leave no stone unturned in order to ensure that all, who have roles to play in the initiative carry them out with patriotic zeal  so as to meet the expectations of Government.

He added that the Scheme has designed a mechanism for strict monitoring of the HMOs in concert with the NHIS Office to guard against service failure.

‘We will ensure that the operations of the health scheme are consistent with the philosophy behind the initiation of this wonderful health insurance scheme by Government.

‘I would like to assure that the NYSC and NHIS Management will also not relent in providing the necessary supervision and enabling environment while also monitoring and ensuring seamless operations of the health scheme.

‘Having come this far, we will not hesitate to take appropriate decisive actions against any individual or institution whenever there is any noticeable infractions and gaps in the implementation of this initiative’, Ibrahim warned.

The DG enjoined all Corps Members nationwide to avail themselves of the unique opportunity provided by the NHIS to access qualitative health care at no cost, while he also enjoined them to reciprocate the gesture by being conscientious in the discharge of their duties to their fatherland.

Major General Shuaibu Ibrahim during the programme reiterated his call for the establishment of NYSC Trust Fund which has passed the second reading at the National Assembly.

He said the fund when established, would reduce dependence on government for funding the Scheme, as well as provide jobs for millions of Nigerian youths through the provision of start-up capitals to Corps Members at the end of the Skill Acquisition and Entrepreneurship training they went through during the service year. The Fund would drastically curb youth restiveness as well as other forms of criminality in the country according to the DG.

The Executive Secretary, National Health Insurance Scheme, Professor Mohammed Nasir Gambo said that the agency was saddled with the execution of Presidential mandate of attaining universal health coverage for all Nigerians in line with the declaration of sustainable development goals.

He said that the NHIS/NYSC initiative was in the right direction because of its significant contribution to the well-being of Corps Members nationwide.

‘It is worthy to note that investment in the welfare and wellbeing of young people is one of the most critical things that we can do as a responsible nation.

It is our patriotic duty as individuals and organisations to ensure that we make education, employment and quality healthcare available, accessible and affordable”, he said.

Professor Sambo appealed to Health Maintenance Organisations and Healthcare Providers to work within the operational guidelines of the NHIS and also ensure that no Corps Member is left unattended to.

The Minister for Health, Dr Osagie Ehanire was represented by the Director, Public Health in the Ministry, DrAlex-Okoh MO.