Every Easter Season is culminated in and by Pentecost Sunday, when the Church celebrates her birthday through the outpouring of the Holy Spirit. The immediate Sunday after Pentecost Sunday is called Trinity Sunday, when the Church celebrates the Second Principal reality which is both a mystery and a Dogma. The celebration of this Mystery comes after Pentecost just like Pentecost comes after Ascension to tell us that Christ’s work of Redemption – the Pascal Mystery is a work of the Blessed Trinity.

According to Raniero Cardinal Cantalamessa, OFM Cap, in his 2018 Homily on Trinity Sunday, the approaches of the Latin and Greek Churches on this is a reverse of each other, yet both have no contradiction, but an agreement. For while the Latin Church professes Three Persons in One God, the Greek Church speaks of One God in Three Persons. This is an indication of the fact that the Trinity is an eternal truth, for as it was in the beginning, is now, and ever shall be world without end.

The Trinity is among the revelations Jesus Christ made to us, and this revelation is made sacramental. Christ gave the Church the baptismal formula which is valid in perpetuity, just as the Trinity exists in perpetuity, by instructing us to baptize in the name of the Father, and of the Son, and of the Holy Spirit (see Matt 28:16-20). It shows that God is not plural but singular, for we do not say in the ‘names’, but in the name.

This theology of identity of Divine nomenclature of the Trinity has been deepened by the insights from the Fathers of the Church. On this account, Justin Martyr teaches that: “For, in the name of God, the Father and Lord of the universe, and of our Saviour Jesus Christ, and of the Holy Spirit, they then receive the washing with water” (“The First Apology, ” Chapter LXI). 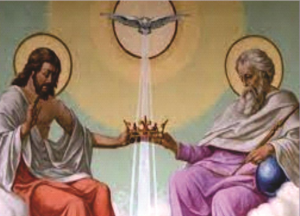 In his work, “Hexaemeron” which is his exegesis on creation, Ambrose interprets the text where God said ‘let us create man in our own image’ (see Gen. 1:26) to mean that the expression “our own image” which is plural personal pronoun demonstrates that the Eternal Father was speaking to the Son and the Holy Spirit since it was obvious that nothing yet has been created.

Therefore, only the Creator (Hexaemeron, b. Work on Adornment). Thus, in that language, devoid of saying “our images”, the Father said “our image.” This is what Jesus the Son confirms too in the afore cited text by telling us to baptize in the Trinitarian “name.” The logic here is the meeting point of Divine subject and human subjects –  the humans made in “image” of God are baptized in the “name” of the same God.

In like manner, John Chrysostom counters the Sabellian heresy that denies the Trinity by teaching that there are three modes of existence in God, and not three persons in one and same Godhead. This implies that if God transits from one mode of existence to another, then He is not perfect and eternal.

Chrysostom in opposition to Sabellus, explains Paul’s teaching by asserting that: “Some names are common to several; others are proper to one. There are common names to show that the essence is exactly the same; there are proper names to characterize what is proper to the personal realities.

The names “Father” and “Son” characterize what is proper to the personal realities; the names “God” and “Lord” show what is common. Therefore, after Paul set down the common name of “one God,” he had to use the proper name so that you might know of whom he was speaking. He did this to prevent us from falling into the madness of Sabellius.” (Sermon 5 On the Incomprehensible Nature of God). This which he says of the Father and the Son is applied to the Holy Spirit.

Therefore, there is always reference to the Father. This is such that as Augustine teaches about the Son and the Holy Spirit with pointer to the Father, that both are “tamquam ab uno principio” (proceed from one principle). Yet, none is above the other, for if any is above one or others, then it would be a contradiction within the Godhead. In fact, the identity of each personality is made unique, yet this union of the three makes it a mystery.

The oneness in nature of the Three Divine Persons is seen in the distinctive roles each play, yet each of these roles is played in relation to one another. The roles are what made Gregory of Nazianzus in his “Theological Oration” to qualify the distinctive characteristic of each of the Persons with the Greek word, ‘idiotetes’ (properties). This relationship is called “Divine pericoresis”.

The Father brought the world into being in Creation, yet not alone, but in union with Son and the Holy Spirit. The Son redeemed the world by His Incarnation, Passion and Death, yet in accordance to the Will of the Father whom He glorified, and the Holy Spirit who formed Him in Mary’s womb. In the Pentecost, the Holy Spirit sanctified mankind in renewing the face of the earth, yet not just in His own accord, but in Obedience to the Son at the approval of the Eternal Father.

These events which though took place in time, do not limit the Triune God in time, for He was before and is beyond time. It is on this account that Gregory Nazianzus say that: “When did these (Father, Son and Holy Spirit) come into being? They are above all “When.” But, if I am to speak with something more of boldness,–when the Father did. And when did the Father come into being. There never was a time when He was not.

And the same thing is true of the Son and the Holy Ghost. Ask me again, and again I will answer you, When was the Son begotten? When the Father was not begotten. And when did the Holy Ghost proceed? When the Son was, not proceeding but, begotten–beyond the sphere of time, and above the grasp of reason; although we cannot set forth that which is above time, if we avoid as we desire any expression which conveys the idea of time” (Theological Oration, III.3).

In being co-eternal, the Trinity becomes the ultimate definition of sanctity or Holiness, for being in eternity being perfect in the order of things, of which Holiness is the chief. Consequently, if we who are humans bound by time tend towards being saints, it means that there is someone in eternity that draws us closer to Himself from time. That Someone is the First Saint who exists in Three Persons as One God.

It is the same that approves the intercessions of Saints in Heaven on our behalf. This is why Clement of Alexandria exclaims: “O mystic marvel! The universal Father is one, and one the universal Word; and the Holy Spirit is one and the same everywhere” (The Instructor, Bk I, Chapter VI).

Let us adore the Blessed Trinity saying: Glory be to the Father, and to the Son, and to the Holy Spirit. As it was in the beginning, is now, and ever shall be world without end. Amen.