Portuguese giants, Benfica Football Club, has promised to support sports development in Nigeria in order to further strengthen the relationship between the two countries.

This came as Vice Presidents of the club, Mr Manuel Debrito and Mr Jose Gandarez praised the laudable ideas of Nigeria’s Sports Minister, Mr Sunday Dare, who paid a visit to the club.

Mr Dare was in Portugal alongside President Muhammadu Buhari to discuss ways to continually develop sports in the country.

The Minister was given an official tour of Benfica’s facilities, including the enormous 65,000-capacity Estádio da Luz home ground of the club. 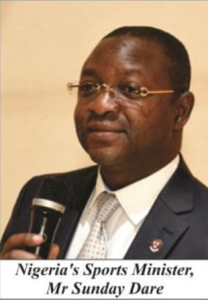 After several brainstorming sessions, Mr Dare and the Benfica Vice Presidents shared notes on football development for the country and also on club football structure.

Mr Debrito said, ‘Nigeria is blessed to have Dare as its Sports Minister. His ideas on sports administration are lofty and charming. He is in touch with modern trends in sports development and we appreciate him for honouring us with his presence.’

Mr Dare was also presented with the official jersey of the 37-time Portuguese football league champions, as he appreciated the club for its warmth.

‘I want to appreciate this club that stands as a global sporting institution. Your 65,000-capacity stadium is one of the top football grounds in Europe and we are putting all hands on deck to achieve the same and even more in Nigeria. Just as this club has a thriving youth system that has generated over 1 Billion Euros in the last decade, Nigeria is also unrelenting in grassroots sports development and we would borrow a leaf, where needed,’ Dare said.

Nigeria’s Minister of Youth and Sports Development arrived in Portugal last week with President Buhari to seal multiple Memoranda of Understanding in the area of Sports, as well as Youth development between Nigeria and Portugal.