Ahead of  the Falcons next clash against Botswana, former Super Falcons stars have warned that the nine-time winners must change their tactics and approach if they are to return to winning ways.

Two quick second half goals from Jermaine Seoposenwe and Hilda Magaia handed the South Africans their fourth-ever win over the Falcons despite a consolatory goal from Rasheedat Ajibade in additional time. 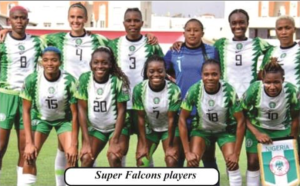 Former Falcons star, Maureen Madu, believes the Falcons will redeem their image against Botswana if they changed their tactics.

Speaking with newsmen, Madu, the most capped Falcon, said, ‘They must change a lot of things in terms of tactics and players. Some of them did not look ready for the game, but we hope they will bounce against Botswana. I’m confident that they will bring back the cup.’

A former Falcons forward, Efioanwan Ekpo, who is now Pelican Stars coach, added, ‘They must do better than they did against South Africa. It wasn’t pleasant to see them lose the way they did, but there are still opportunities for them to bounce back.’