The event which was held at the community’s Civic Centre Hall saw an estimated beneficiaries of 150 from the 5 villages that make up the community. It also featured free medical services and lectures on Primary Health Care, Breast Cancer, Arthritis and Prostate Cancer which was warmly accepted by the community at large. 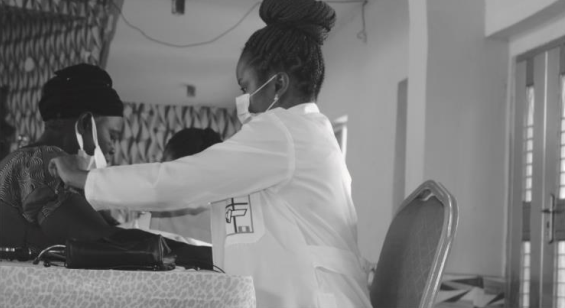 Reminding them of the need to put an outreach in the area of health for the people, Dr Okafor explained that the outreach was in honour of his late wife, Mrs. Okafor, whom, he said, was involved in benevolent acts and helping the poor as a means of giving back to society.

Dr Okafor further explained that the free medical outreach was targeted at meeting up with the wish of his late wife who had wanted to do same anytime his son graduated from medical school.

His words: ‘She was a lady with a large heart. This has always been her vision that anytime the son graduated from the university, she would like to do something for the community. Even before her death, she was used to taking care of the elderly, young and adolescent. She sponsored education of well behave children and also lent a helping hand to the aged.’

The facilitator said his wife’s kind heartedness and passion for attending to the health needs of the aged were not publicised.

He said it was why he and his son, Charles, who is also a co-facilitator, deemed it fit to immortalize her with the medical outreach.

the president, Anambra State Association of Town Unions who doubled as the President General, Eziowelle Improvement Union Nigeria, Hon. Chief Barrister Titus Akpudo, who shared his joy on the importance of the outreach in the community and also to the Family of Dr. Laz Okafor for their kind gesture in continuing the good deeds of the late Mrs. Gloria Okafor.

He described her as a lady with the heart of gold that would be greatly missed in the community for her altruistic nature.

The beneficiaries also expressed joy over the largesse of medical services.