The annual festival which is used to thank God for his grace and mercies upon the community and for favouring them with a bountiful harvest, is an opportunity for the custodian of the community to confer chieftaincy titles on about seven individuals in the Community. Three persons among the awardees were given the Ichie titles based on recommendations from their kindred; while four others, including the Permanent Secretary of the Ministry of Culture, Entertainment and Tourism in Anambra State, Dr. Laz. Okafor, were given the titles of High Chiefs as a result of their individual contributions toward the growth of the community.

Fides gathered that the persons decorated with the chieftaincy titles will serve as cabinet members of the traditional ruler for more contributions geared at repositioning the community. 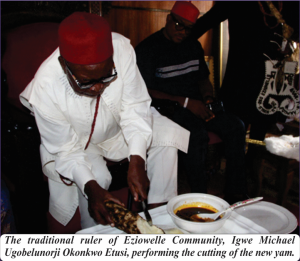 The festival which attracted members of the agrarian community, top government officials, prominent citizens; including sons and daughters of the community, commenced with a special prayer session led by the Parish Priest of St. Edward’s Catholic Church, Eziowelle, Rev. Fr. Chris Odimegwu.

The Commissioner for Local Government, Chieftaincy and Community Affairs, Mr Tony-Collins Nwabunwanne, noted that Iwaji remained a tradition in Igbo Land that showcased the Igbo cultural heritage to the world.

Mr. Nwabunwanne maintained that the government of Anambra State would continue to promote Igbo culture and tradition and commenteded Igwe Okonkwo for his efforts in repositioning Eziowelle Community for better.

Performing the kola nut rituals, Igwe Okonkwo explained that they inherited the festival from their fore-fathers and explained that it was geared towards promoting peace, unity, harmony and togetherness.

The monarch thanked God for the gift of life which made the celebration of the new yam possible. He prayed for the growth of the community, state and everyone present, at the event, praying that they would be fruitful in all their endeavours.

He lauded Governor Chukwuma Soludo for the massive inauguration of different road projects in the state and expressed the hope that it would help to open up the agrarian communities in the state.

Paying of homage by various families and groups in the community, as well as cultural performances, were the high points of the celebration.