The late traditional ruler of Amawbia Community in Awka South Local Government Area of Anambra State, Igwe Chinyere Nnaemeka Molokwu (Eze Okpaligwe), has been described as a man whose emergence as the monarch healed old wounds in the community. The elder brother of the monarch, who was buried last weekend in Amawbia, Sir Nche Okechukwu-Molokwu, stated this while addressing newsmen ahead of the funeral activities that lasted from 25-28 August, 2022.

A committee of 35, led by Chief Ikem Odumodu, had been set up to oversee the success of what was tagged the first and last ofala ceremonies. 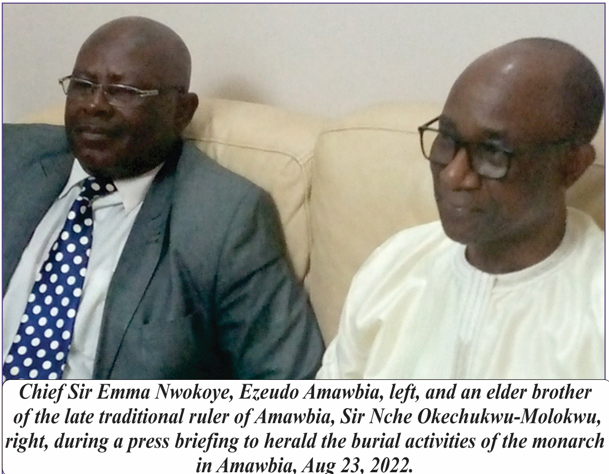 Sir Okechukwu-Molokwu who gave the background of the 76-year old deceased Igwe, from his education to business life, described him as a humble man who eventually became the traditional ruler of the town.

He said his emergence healed the wounds of the past and reunited the people and introduced many innovations but regretted however that his reign was short.

‘He initiated cultural revival, health insurance scheme for indigent families through the wife, youth empowerment, among others.

‘His demise was a big blow to everyone but we accept the inevitability of death. We are like actors and we perform and we exit,’ he said.

The first and last ofala activities started last Thursday, August 25, with an inter-denominational service at St Peter’s Anglican Church, Amawbia. It was followed the next day by a 21-gun salute/uhe music and other traditional ceremonies, as well as condolence by groups.

Saturday witnessed cultural displays with another round of Uhe music, plus other traditional activities. A procession was done from the town hall to the palace. There was a message from the eldest brother and ofala dances.

Fides gathered that turning of the stool was done after the last ofala dance to signal that the throne had become vacant. A regent will stay for six months after which the process of choosing a new monarch begins.

Many dignitaries, including the governor, attended the Saturday event.

The late monarch who died on August 29, 2021, is survived by three children.