Extension of School Days to Saturdays, How Smart?

The recent move made by the Anambra State Government to replace Mondays with Saturday lessons for students in public schools, effective Monday October 25, may be a good one on the surface if the disruption of school lessons on Mondays by the sit-at-home directive given by the Indigenous People of Biafra, IPOB, is considered.

That directive which has been largely effective, has led to pupils and students having four days instead of the usual five of academic work. In this respect, it shows a government anxious to make up for lost time and to ensure that our children are not disadvantaged.

In the circular sent out by the state government to this effect, all teachers and pupils were expected to adhere to the new development, with government assuring that quality supervision and every other supervision would now be held on such Saturdays.

According to the Chairman of Anambra State Universal Basic Education Board, (ASUBEB), Chief Patrick Ugboaja, it was a move made after stakeholders in the state met with the government to discuss the way forward for education. He said it was the best decision for the betterment of the children and education in general because of the current situation in the Southeast. 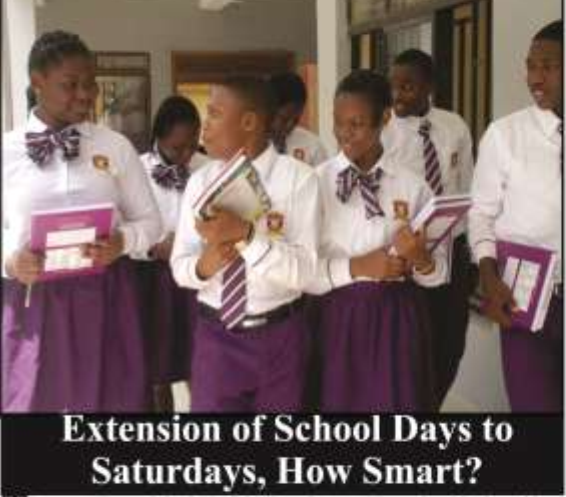 But a further look at it shows a government that may well have succumbed to the power of non-state actors, a development that could well be interpreted as two governments existing in one state. This is fraught with some negative consequences, chief of which is that these non-state actors may become emboldened by this singular ”victory” and come out with more damaging directives.

In any organized society, citizens look up to constituted authorities for direction and leadership but when such authorities abdicate their responsibilities to non-state actors, likely confusion may set in.

To say that confusion has not set in these days in the entire Southeast is to be economical with the truth. Many people now plan their activities to avoid them clashing with the sit-at-home days. Even when they do so, emergency sit-at-homes may still be declared and this automatically scuttles the plans of such people.

Indeed, even now, there are rumours of a looming one week sit-at-home to press home the demand for the unconditional release of IPOB leader, Nnamdi Kanu. This invariably brings the conduct of the Anambra State Governorship Election under threat of holding as the planned lockdown begins on the eve of the election.

The situation is further worsened by the fact that anyone could post a voice note on social media, threatening to attack people if they come out on a certain day and many will believe it. That is how bad the situation has become and it all boils down to the failure of government to take decisive actions on this matter when it should. Now, however, it is becoming too late to do so.

Barely a week ago, some idle youths somewhere in Awka went round the community and announced through a town crier that no one should come out the following Monday as they had observed that the people of the are did not observe the Monday sit-at-home. They claimed to have got authority from the community’s monarch.

The next day many shops closed and some roads were barricaded. A woman was fleeced N20, 000 for ”daring” to come out in her vehicle. But investigations by some concerned people discovered that the said monarch who was said to have given the youths authorization did not do so. He also claimed he never heard about any announcement.

It was then that a counter announcement was reportedly made for people to come out. Had those concerned people not taken it upon themselves to counter the action of those youths, they would have succeeded in further bringing pain to peace loving, hardworking citizens.

What those concerned people was perhaps what our government and those of the entire Southeast should have done initially. But not being able to do so eventually emboldened the non-state actors who are now seemingly in control of governance.

This is why the recent directive by the government for schools to commence Saturday lessons appears defeatist. So if another day is yanked off by the non-state actors, does it mean the government will now direct that school days should be extended to Sundays?

We believe that having failed to use its authority to restore sanity in the state, government should have looked for other options, including diplomacy. We have always maintained that there should not be two governments in a state as that comes with attendant dangers.

Giving the impression of succumbing to non-state actors will therefore not solve the problem on the long run. It can only massage the ego of those non-state actors and invite them to continue flexing their muscle.

With the way things are going, the Southeast’s economy will soon collapse and this will only lead to more crime.

Thus while we commend the Anambra State Government for showing concern for our children’s education, we think it should do more to assert its authority before lawlessness overwhelms the state.