The cause of the ravaging activities of cultists in Anambra State may just have been uncovered, following the arrest, last Monday, by the Anambra State Police Command, of a police sergeant (name withheld), suspected to not just belonging to a cult group, but supplying arms to them, reports Ikeugonna Eleke.

Rumours on social media had it that the policeman who also serves in Anambra State, also hired out his firearms to members of his cult group for nefarious operations in the state. 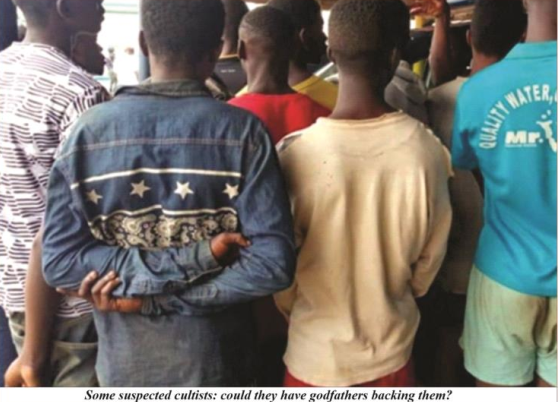 For some time now, Awka, the capital of Anambra State, has been under siege by cultists, resulting in regular clashes among rival gangs that have left many dead. On Thursday, October 21, a total of six people were gunned down around the Okpuno area of Awka, while the next day, one was gunned down at Regina Junction. These were part of the long list of skirmishes by rival cult groups that have almost overwhelmed the capital city as hardly two days pass without reported shooting and killing of one or more cultists.

Apparently in a move to stem the tide, some communities in Awka invited the popular non-conventional security outfit known as Bakassi Boys. Their re-emergence had quickly checkmated the spate of killings, but hardly had they settled down that it was reported that some influential elements in the town opposed their stay and they left. Now the onslaught is back.

Reacting to the story of the arrested policeman, the Anambra State Police Command’s spokesperson, DSP Tochukwu Ikenga, confirmed that the sergeant was currently in the custody of the police for questioning over his involvement in the alleged crime.

Ikenga said: ‘The attention of the Anambra Police Command has been drawn to a story trending on the social media alleging the involvement of a police sergeant in the illegal supply of arms and ammunition to a criminal gang in Awka, Anambra State.

‘The alleged police sergeant has been identified and is already in custody for questioning. The Command assures that the outcome of investigations into the case will be made public and reiterates its commitment to be accountable for all personnel serving in the Anambra State Police Command.’