The Catholic Bishop of Awka Diocese, Most Rev Paulinus Ezeokafor, has again flayed the Nigerian Government over what he described as the incessant insecurity and maladministration which have bedeviled Nigeria, wondering at the failure of government to address the menace.

Bishop Ezeokafor, who stated this in his homily of the concelebrated Holy Mass to mark the Silver Jubilee Anniversary of Awka Diocesan Catholic Men’s Organisation (ADCMO), at St Patrick’s Cathedral, Awka, last Saturday, May 30, insisted that every citizen of the Country deserved right to equity and justice in a secular state such as Nigeria.

The Catholic prelate condemned what he identified as the one sided Nigerian Constitution and one sided appointment, which, according to him, had favoured only the northerners and the Fulanis, while others such as the Southeast, were denied appointments into major positions. 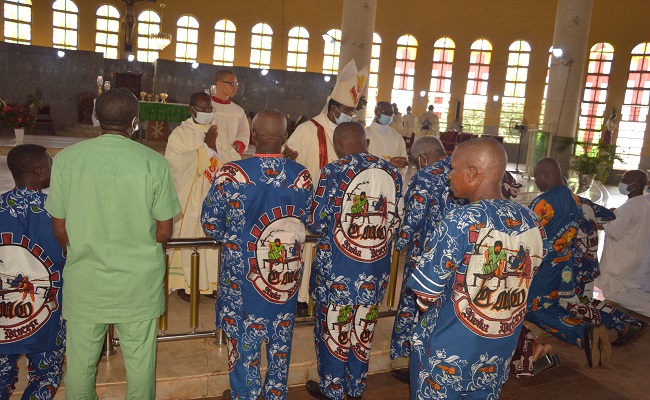 The Catholic Bishop of Awka Diocese, Most Rev Paulinus Ezeokafor (centre, on the altar), blesses the executive and members of the ADCMO. He insists on equal rights and opportunities for every Nigerian, St Patrick’s Cathedral, Awka, May 30, 2021

He described the insistence of the Fulanis on open cattle grazing and the appointment of mostly Fulani people into major decision making positions in the country as fueling allegations that the government planned to turn Nigeria into a Fulani state.

According to him, one Nigeria was not at all costs, but must be a Nigeria that must give all the citizens equal rights and opportunities, and not one that would favour one tribe and humiliate others.

Pointing out that the instinct for human preservation was natural in man, the bishop charged all to protect and preserve their lives and their faith. He urged all to pray for the Nigeria, which, he said, was in great distress.

Most Rev Ezeokafor insisted that there was need to restructure Nigeria to give the people of the Southeast and others the power they needed to grow.  He thanked God for the current decision of southern governors against open grazing, describing that as a welcome development.