As the Holy Mother Church celebrates the 2021 Solemnity of the Most Holy Body and Blood of Jesus Christ, the Director of the Catholic Diocese of Awka-owned Archbishop A.K. Obiefuna Retreat, Pastoral and Conference Centre, Okpuno (ABAKORPACCO), Awka South LGA, Anambra State, Rev Fr Chimaobi Polycarp Okoye, has described the Holy Eucharist as the summit of the Catholic faith.

Rev Fr Okoye, who stated this in his homily of the Holy Mass to mark the solemnity also known as Corpus Christi, at the Good Shepherd Chapel of ABAKORPACCO, last Sunday, June 6, noted the Holy Eucharist, which was the body and blood of Jesus Christ, was the summit and life of the Catholic faith. 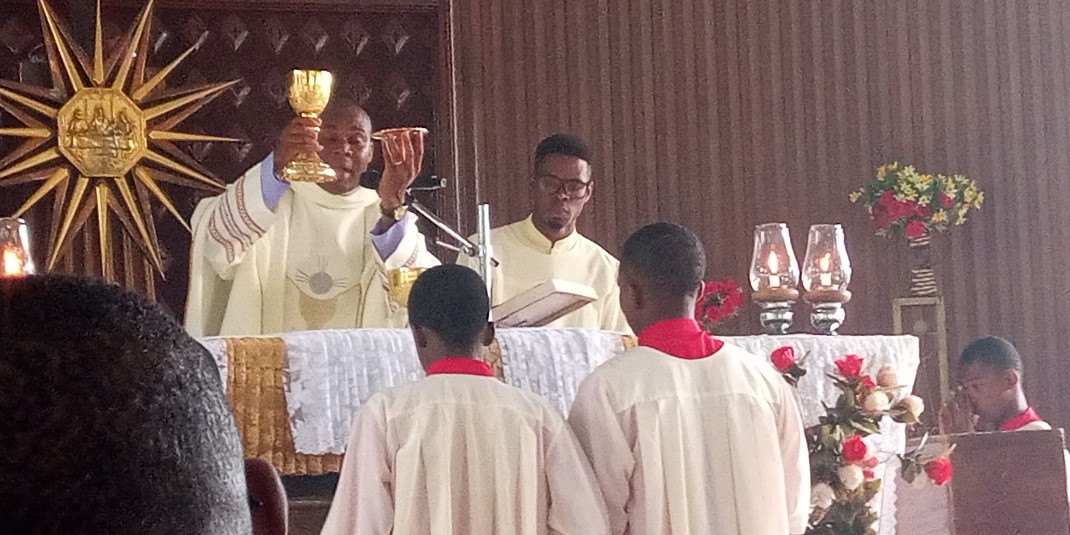 The Director, Archbishop A.K. Obiefuna Retreat, Pastoral and Conference Centre, Okpuno, Rev Fr Chimaobi Polycarp Okoye (raising the Body and Blood of Jesus Christ in the chalice and ciborium), leads in the Eucharistic Celebration for the Solemnity of Corpus Christi, ABAKORPACCO, June 6, 2021.

According to him, without the Holy Eucharist which had so many benefits in it, there would be no Catholic Church, no priesthood and no lay faithful.

The priest advised the faithful against becoming the group of Christians who received the Holy Eucharist and became indifferent to it, just as the Israelites were indifferent to Manna, and those he described as hardened Catholics and hardened Christians, who, even though they attended Holy Masses, never allowed Christ into their lives due to their laissez faire attitudes.

He encouraged the faithful to make efforts and be among the Catholic Christians, who according to him, believed that Christ had the message of eternal life, followed Jesus Christ in truth and faith, went to confession regularly and received the Holy Eucharist in thanksgiving, so as to reap the benefits of the Sacraments and be saved by God.

On why the Holy Eucharist and other six Sacraments of the Church were referred to as Sacraments, Fr Okoye, explained that they were channels through which God, who was a supreme being, communicated to his people.

Recalling that Passover was the annual celebration of the Jews during which they re-enacted their exodus from Egypt, the priest, stated that it was due to the importance of the Holy Eucharist to the faithful that Jesus Christ, had on the night of the Jewish’s Passover, handed over the Eucharist as his body and blood to his apostles, and instructed that the Holy Eucharist be celebrated as a memorial in his name.

He identified Christological, ecclesiastical, spiritual and public, as the basic characters of the Sacraments. According to him, the sacraments were Christological, because Christ was the focal point of the seven Sacraments of the Church.

‘There is no Sacrament that is not public. In Baptism, Confirmation and Holy Matrimony for instance, there must be the priest, the recipients and the sponsors. A priest that celebrates a private Mass will never say ”the Lord be with him, but instead, the Lord be with you”, as the Holy Eucharist must be public.’

The Catholic priest added that in the Sacrament of Holy Eucharist the Church celebrated four basic presence of Jesus Christ, which were the personal presence, the commemorative presence, the somatic (flesh) presence and the proleptic presence.

According to him, whenever the Eucharist was celebrated, Christ was there in person. The faithful who commemorated the presence of Christ were reminded of the need to be holy like Jesus Christ who they received his personal presence during the Holy Communion and anticipated eternal meal with on the last day.

He added that sacraments were of divine origin while the sacramental, which were holy symbols, were of the Church origin.

Rev Fr Okoye flayed those, who, he said, buried sacramentals such as crucifix of Jesus Christ and statue of Holy Mother Mary in the ground, describing their actions as abuse of the sacramentals. According to him, sacramentals were not magic wands but symbols which the priests blessed through the intercession of the Church and through which the faithful that used them were reminded of God.