Nigeria international, Alex Iwobi, was handed his third start in six league games for Everton last Saturday as the Toffees returned to winning ways with a 2-0 thumping of bottom side Norwich City.

Iwobi was on for 89 minutes at Goodison Park, an indication he was impressive enough for coach Rafa Benitez despite not scoring nor assisting against the Canaries.

After a bright start that saw Everton win their first three games and drew their first four games in the EPL, they were humbled 3-0 last weekend by Aston Villa and afterward dumped out of the League Cup by Queens Park Rangers.

It was thus imperative for Benitez to halt what was looking like a freefall for his team.

After a cagey start to the game, Everton were handed a lifeline with a penalty awarded just before the half-hour mark and it was expertly tucked away by Andros-Townsend as the hosts took a 1-0 advantage into the break.

Despite the chances created, Everton’s second goal and effectively the winning goal did not come until the 77th minute through Abdoulaye Doucoure. The goal by the 28-year old French midfielder was his second of the season. 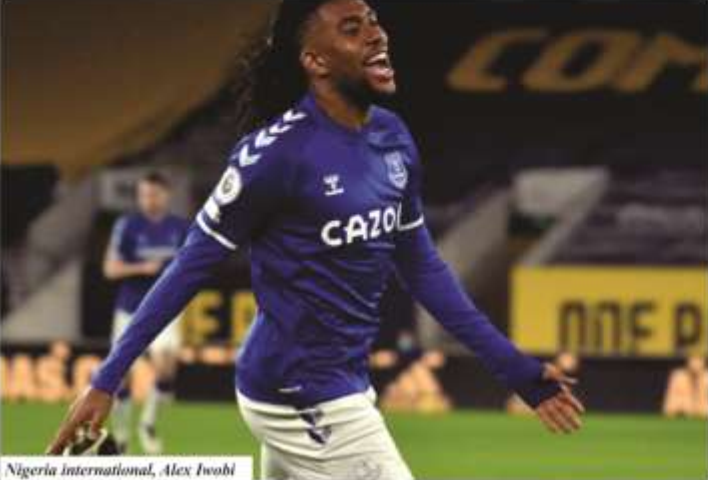 In other games also played same Saturday, the Nigeria stars on parade had to settle for solitary points despite playing at home.

At Vicarage Road, Emmanuel Dennis and William Troost-Ekong were both booked as Watford held Newcastle United to a 1-1 draw.

Sean Longstaff gave the Magpies a 23rd-minute lead but they were pegged back in the 77th minute by Ismaila Sarr. Oghenekaro Etebo came on as the 75th minute for Dennis while Ekong went the full distance.

At the King Power Stadium, Kelechi Iheanacho provided the assist for the equalising goal as Leicester City battled to a 2-2 draw against Burnley.

Jamie Vardy scored an own goal earlier in the game but hit a brace for the Foxes to earn them a share of the spoils against Burnley.

West Ham pipped Leeds United 2-1 away from home, courtesy of a 90th-minute goal from Michail Antonio, to go seventh on the table