… Presents Book on Mission in Kano 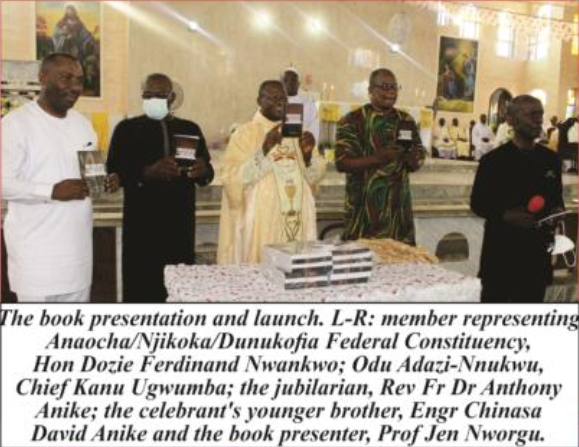 Many dignitaries from all walks of life among whom were the member representing Anaocha/Njikoka/Dunukofia Federal Constituency, Hon Dozie Ferdinand Nwankwo, and a retired Deputy Comptroller, Immigration, Okechukwu Agbanu, graced the 2022 celebration which was held at St Andrew’s Catholic Church, Adazi-Nnukwu, Anaocha LGA, Anambra State. It featured the presentation of a book that was authored by the jubilarian.

Leading in his concelebrated Jubilee Thanksgiving Mass, Rev Fr Anike who is also the Dean of Adazi Region and Parish Priest of St Andrew’s Parish, thanked God for what he described as the blessed gift of healthy life and grace, as well as for his sustenance thus far. 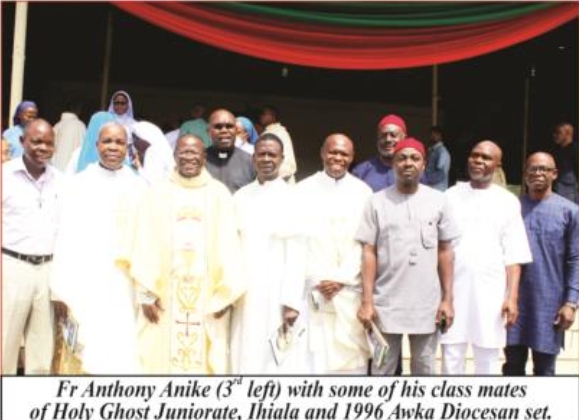 The silver jubilarian, who was visibly joyous, appreciated the many priests, religious and laity who graced the event from all parts of Nigeria and beyond for their presence and support. According to him, their presence depicted their goodwill and kind gesture.

Presenting the Book titled, ”Memoirs and Mission to Diocese of Kano-Nigeria”, authored by Rev Fr Anthony Anike; the Orator, Nnamdi Azikiwe University, Awka, Professor Ken Nworgu, described the book as well written which reflected the resilience and commitment of Fr Anike on his apostolate in the Old Kano State.

The university don, recommended the 48-page and 5-chapter book which he said was written in simple English Language and was published by Fides Media Ltd, Okpuno, as a must read for all, noting that it contained a message of salvation.

Fides gathered that Rev Fr Dr Anthony Anike, who hails from Enugwu-Ukwu, Njikoka LGA, Anambra State, and was born in Kano, Nigeria, is an old boy of Holy Ghost Juniorate Ihiala. He was ordained a Catholic priest for Awka Diocese at St Anthony’s Catholic Church, Enugwu-Ukwu on July 27, 1996. He went on a mission to Kano State two years after his ordination, and worked in the Catholic Diocese of Kano for 16 years (1998-2014).

Fondly known as Ifemelumma due to the love  his parishioners had for him because of his hard work and commitment, Fr Anike was described as a disciplinarian who is humble, loving, and generous and had a sense of humour and an accommodating spirit.

For his part, the jubilarian’s younger brother, Engr Chinasa David Anike, in his testimonial biography which he wrote for the celebrant, described Fr Anike as a very committed pastor whose sense of pastoral availability was second to none.

Earlier in his homily, the Parish Priest of Holy Family Parish, Agulu, Anaocha LGA, Rev Fr Hyacinth Anaekee, urged the silver jubilarian to hold on to what he described as his notable passion and commitment to the things of God and the Church.

The homilist, who based his reflections on the readings of the Thursday, prayed that the celebration would ignite more zeal for committed priesthood in Fr Anthony Anike so that he would in line with his nickname, Ifemelumma, be more docile to the spirit of God. According to him, such priestly docility validated priestly anniversary.

Presentation of Papal Blessing Certificate to the celebrant, book launch, as well as exchange of gifts and souvenirs were highlights of the event.