Environmental Sanity, a Beautiful City with an Insane Look

When I was younger, I and my siblings used to watch the “Johnny Bravo Cartoon”. I for one didn’t like seeing the guy Johnny. I finding him very annoying and amusing at the same time. He was big at the torso, had enormously large shoulders and very slim at his lower body, coupled with his promiscuous nature which infuriated me as a child. So, this particular episode, featured a guy who dropped a piece of paper on the road.

He actually dumped it in the bin but it missed and fell. Unfortunately for Johnny, he was mistaken as the culprit. He was arrested. Now, tha…at blew my mind! Someone arrested for littering?? Biko nu, when will our country be like this? Isn’t good thing worth emulating? 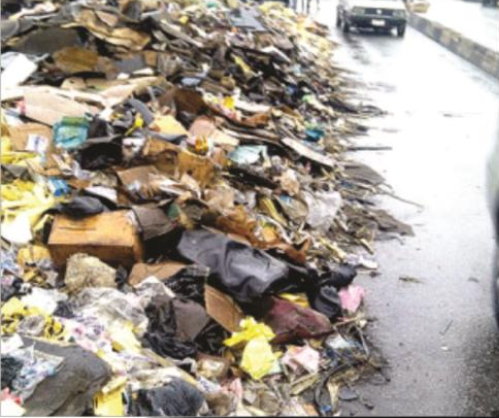 Looking at Awka from an elevated view, you can’t help but scream,” Wow! This City is beau…ti…ful!” Its picturesque look and well-built sophisticated buildings with its colourful zincs would definitely leave an impression on you as a first timer.

Yes, truly, Awka is a beautiful and blessed City, but in a city, country where cleanliness begs the question, where passer-by could comfortably and confidently throw their corns, groundnut peels on the floor on the go, and motorist would carelessly throw banana peels and what have you out of their windows, its alarming!

Taking a walk along the CBN road, the squalid drainage filled with all manner of debris makes you want to puke. Go to temp-site or Aroma or eke-awka, where roadside sellers comfortably mount their food stand over extremely dingy gutters that could give you cholera. And I am mostly befuddled to see people patronizing them, with zero concern for the consequence it might have on their health.

How about the roadside waste bins? The Anambra State Waste and Management Agency(ASWAMA)only remembers to pack the bin when a good amount of the refuses must have scattered all over the roads by either rain, madmen and worst, these crazy set of guys called Bola who make a living from rummaging through the dump for metals and plastics.

When I newly moved into Green Tower Lodge along arch Bishop A.K Obiefuna Road, everything seemed perfect. I usually loved and savoured the early morning chill breeze and the tranquility that comes with it. I met very friendly and cheerful neighbours which made me feel at home. We used to have someone come to sweep the lodge at least once a month which kept the surroundings sane.

But suddenly things changed, the sweepers stopped coming. Now, our compound could easily pass for a pig house. My next door neighbours would pile up their bins, right adjacent my door. On opening my door, the odour oozes into my nose, coupled with the disturbing noise that comes from their generator.

Worst, this particular guy named Steve, would play his music to the loudest that it would seem as though the song was being played in my room. All my complaints and appeal to them was treated with blatant disregard!

Nothing is as discomforting and infuriating as noise pollution! At the parks and the popular eke-Awka Market, don’t dare the local entrepreneurs with their hilarious and loud marketing skills- “ato na oche, ato no oche, okwu nani enweghi oche! –three three on the seats, he who is still standing has no seat” “staphylococcus aeros! syphilis aeros!”, “iba na ulo i ga iwete ihe, I che fuo, bia welu ogwu gi eba! -it’s a problem anytime you go inside to get something and you forget, come get your medicine here”. Hmmm!

Clearly we as individuals   have lost consciousness of what is called simple hygiene and environmental sanity. It’s shocking and despicable. Or does not cleanliness support healthy and balanced growth, and help keep you sane and more productive? Puh…leaasee! We need some fresh air in Awka! We need Operation Kpochapu! Developments is not just advancement in technology! We should stop acting like Third World countries they say we are.

Awka is no doubt a beautiful and enviable City with lots of untapped resources, certainly good for both potential local and foreign investors. With her fast growing economy, no doubt she could likely be the next Lagos in South East! Some people might argue this, but it’s true, like it or not. Anambra State is not entirely doing bad; her internally generated revenue has tripled over the years (from #8.7bn in 2013 -#26bn in 2019 and still counting).

Thank goodness for our new Airport which is no doubt a plus to the economy of Ndi Anambra! Kudos to the State Government on that but you can do more! We beckon on the government to please get to work!

We look forward to seeing more commercial diversities not just hotels and restaurants. Noise pollution should be an offence! Move mad men out of the streets, sanction any parent or guardian who carelessly allows his child on the streets; a better well fare and incentive for children, send them back to school, place a fine on wrong disposal of refuse, keep waste bins at every junction for easy accessibility and pack the bins early, keep the drainages neat and void of debris and fix potholes that could make you lose your pregnancy If you were pregnant.

The importance of good roads and good road networks to industrialization cannot be overstretched. Also, a cheaper and affordable housing and laws to limit the excesses of gluttonous landlords and realtors would go a long way.

We beckon on the government and civilians, let’s sanitize the whole of Awka, Anambra state and the whole country in all! Let’s set the pace as the Light of the Nation that we are!