The Catholic Bishop of Awka Diocese, Most Rev Paulinus Ezeokafor, has called for the outright enforcement of the Anambra State Burial Law so as to control excessive funeral ceremonies in the state.

Bishop Ezeokafor, who stated this in his homily at the thanksgiving Mass to mark the 75th Birthday Celebration of Lolo Chinwe Ofobuike (Ocheze), at the Good Shepherd Chapel of Archbishop A.K. Obiefuna Retreat, Pastoral and Conference Centre, Okpuno (ABAKORPACCO), Awka South LGA, Anambra State, last Sunday, urged the Anambra State Government and community leaders to ensure that the Burial Law was enforced equally for the entire citizenry.

He observed that the excessive funeral ceremonies which still lasted for days in many towns in Anambra State were due to the non-enforcement of the Burial Law, which, he said, had since been passed into law. 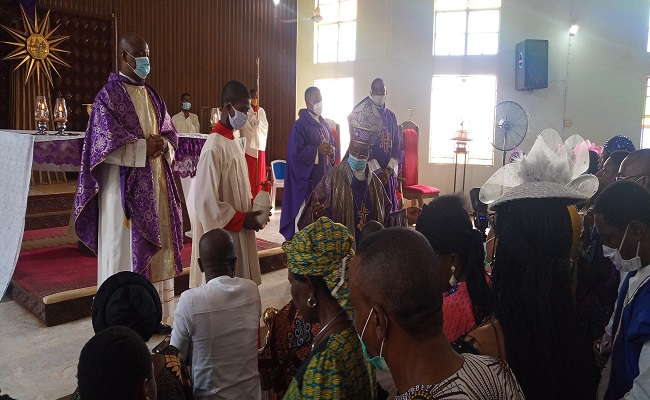 This was even as he registered his displeasure that wealthy people and leaders in various strata were the ones that often violated the Burial Law while organising funerals for their dead. The Catholic prelate, who frowned at the rate at which he said people enslaved themselves with exorbitant funeral ceremonies, urged everyone to, instead, lay emphasis on befitting living.

He insisted that people, especially the aged parents, should be taken proper care of and celebrated while they were alive, and not for the money that ought to be used for the wellbeing of the living to be spent wrongly for the funeral of the dead in the name of befitting funeral.

The bishop encouraged all to obtain copies of the Anambra Burial Law booklet which is on sale at the cost of two hundred Naira at the various Catholic parishes and at Fides MediaPlex, Nodu Okpuno, to get themselves acquainted with the letters of the law.

Bishop Ezeokafor commended the children of the celebrant for considering it worthwhile to celebrate their mother while she was alive and in sound health. Pointing out that such remembrance like birthday and anniversary celebrations were of utmost importance, the bishop however advised against emphasis on elaborate parties.

The bishop, who further based his reflections on the readings of the 5th Sunday of Lent, charged Christians to be partakers in the suffering of Jesus Christ which they were called into.

He flayed those, who, according to him, in their gullibility, tended to accept certain preaching which said that difficulties were not meant for them, noting that suffering was synonymous with Christianity.

While agreeing with the fact that worldly inclinations were not evil, Bishop Ezeokafor advised against occasions where people allowed their material life to outweigh their spiritual life, thereby causing them loss of eternal life.

He emphasized the need for people to discipline themselves in their various endeavours. According to him, discipline was very important in everyone’s normal life.