The Bishop of the Catholic Diocese of Ekwulobia (CADEK), Most Rev Peter Ebere Okpaleke, has charged seminarians, formators at various levels and all the people of God, to emulate Blessed Michael Cyprian Iwene Tansi, who he said, translated words into actions in proper human formation.

Bishop Okpaleke, who gave the charge in his homily of the concelebrated Holy Mass to mark the celebration of the 2022 Annual Patronal Feast, Benefactors /Benefactresses and Friends Day Celebration of Tansi Major Seminary Onitsha, Anambra State, commended what he described as the noble role played by Iwene Tansi in the formation of the youths during his time.

According to him, Blessed Michael Iwene Tansi as an altar knight, a teacher, a catechist, a priest and a monk, provided unparalleled services in the training of the young ones. 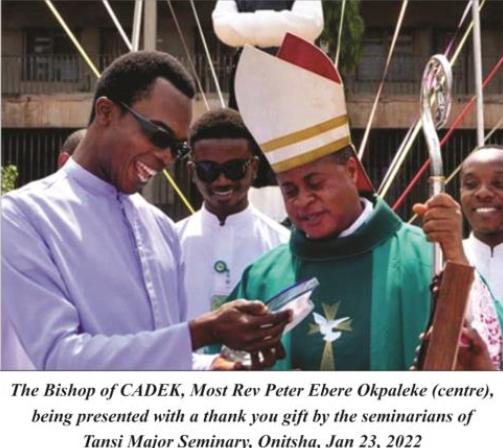 The Catholic prelate charged the seminary formators to continuously give their best to their duties of mentorship of young seminarians and the seminarians to acquaint themselves with the exemplary life of Blessed Tansi.

Bishop Okpaleke, also harped on the centrality of the Word of God in the lives of Christians and called on the seminarians whom he described as per se in the formation in the Word and with the Word to maximize the opportunities presented to them in the noble seminary.

The bishop at the event also solicited for donations from all for the speedy completion of the ongoing Chapel project of the seminary. He noted that the chapel building was very vital in the all-round formation of the seminarians.

He prayed for God’s continuous blessings on the formators, seminarians and all who contributed immensely for the growth of the Seminary.