…as he scores on Premier League debut for Watford

Super Eagles forward, Emmanuel Bonaventure Dennis, is set to take English Football’s top-flight by storm as he wears the number 25 jersey for Watford in the 2021/22 Football season that kicked off last weekend.

The famous number has been seen globally on the backs of other Nigerians that have shone & are shinning brightly in the Premier League. Notably, Nwankwo Kanu at Arsenal, Odion Ighalo at Manchester United, Wilfred Ndidi at Leicester City & Ebere Eze at Crystal Palace. 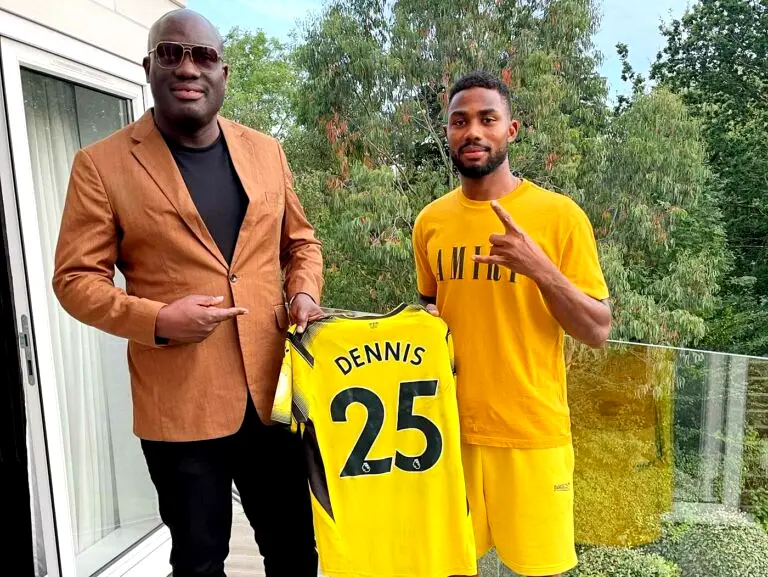 While wearing the famous Number, Kanu shone like a million stars in the colors of Arsenal, scoring some astonishing and decisive goals that proved pivotal for the Gunners in the season they went unbeaten on their way to winning the Premier League title.

Emmanuel Dennis got the opener and assisted Senegalese midfielder, Ismaila Sarr, two quick-fire goals that put Watford 2-0 up. Eventually, Dennis took home the man of The Match Award after getting over 30 percent of the votes in his Premier League debut for Watford, in the Hornets’ 3-2 win against Aston Villa at Vicarage Road last Saturday.

Dennis, who’s a Three-time Belgian Champion with Club Brugge, joined Premier League side, Watford during the summer transfer window in a €4million deal.

The chances of Dennis making a Big splash in jersey No 25 for Watford are quite high given the player’s antecedents and potential to find the back of the net when provided with the services by his teammates.

The Nigerian International scored 27 goals in just over 90 club appearances for Brugge and has featured in both the UEFA Champions League and UEFA Europa League, notably scoring twice at the Bernabeu in

The pacy striker, who has Two Nigerian caps started his professional career with some experience as a teenager in the Ukrainian Premier League with Zorya Luhansk.