Established on November 21, 2011 with the vision of touching lives, as well as building better homes and society where love, peace and progress would thrive, a Non-Governmental Organisation (NGO), known as Excellent Ladies of Valour and Steel (ELOVAS) Foundation Int’l, has described her 10 Years Anniversary this 2021 as the celebration of ten years of touching lives in various parts of the world.

In her address of welcome for the 10 Years Anniversary celebrated by the Awka Chapters of the Foundation held at Tracy Hotels, Awka, Anambra State, December 12, the Founder/President of ELOVAS Foundation International, QueenLady Ngozi Ekwunife, thanked God for the success story of the Foundation in line with its vision.

QueenLady Ekwunife equally appreciated the coordinators, other executive and the members of the Foundation across the globe for sustaining what she described as the noble vision of the Foundation.

The president explained that ELOVAS had for the past ten years, been committed to its programmes and activities and had been able to positively touch the lives of many individuals. 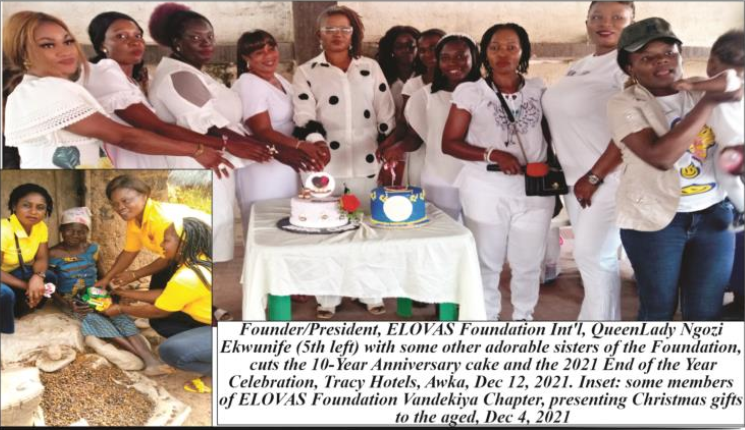 She identified skill acquisition trainings for her members, school outreach programmes and sensitisation of the students on various issues such as dangers of cultism, school drop out and drug abuse, as well as scholarship programme, charity visits to hospitals, orphanage homes and homes for the needy, among others, as some of the activities through which the Foundation had lived out its vision.

Ekwunife announced that the Foundation currently had about six needy secondary school students in her scholarship scheme and solicited for assistance from all, in support of the projects and activities of ELOVAS, which, she said, was a non-profit organisation. According to her, the Foundation was in need of finance and vehicles for running her charity activities and programmes.

The president expressed delight that ELOVAS had on her ten years anniversary, grown to be a noble Foundation and family of love, which, she said, had affected humanity and society positively.

Fides gathered that the 10-Years anniversary which was held simultaneously in all the over 47 chapters of the Foundation across the globe within the month of December 2021, coincided with the 2021 end of year party of the group.

Highlights of the celebration for the three Awka chapters and the Single Ladies arm of the Foundation, were cutting of the end of year and the anniversary cakes, drinking, eating, fastest fingers and dancing competitions.

Prizes were given to the winners of the various competitions.

Fides also reports that as part of the 10-Years Anniversary, the three chapters of Awka 1, Awka 2 and Awka 3, had on Sunday, November 28, paid a charity visit to Amaku General Hospital, Awka, during which the members, known as adorable sisters, donated various items such as food stuffs, toiletries, drinks, provisions, cash, among others to the patients.

Enugu 1 equally had a school outreach programme at the Light House Int’l Secondary School, Ugwuaji, Enugu on November 12, 2021, during which the group sensitized the students on relevant topics and donated some gift items to them.