The Coordinator of the Warri Chapter of Excellent Ladies of Valour and Steel (ELOVAS) Foundation International, Engr Mrs Queen Uche Chigbo, has been honoured with the Delta State Civil Society Woman of the Year, 2021 Award by the Delta State Government. 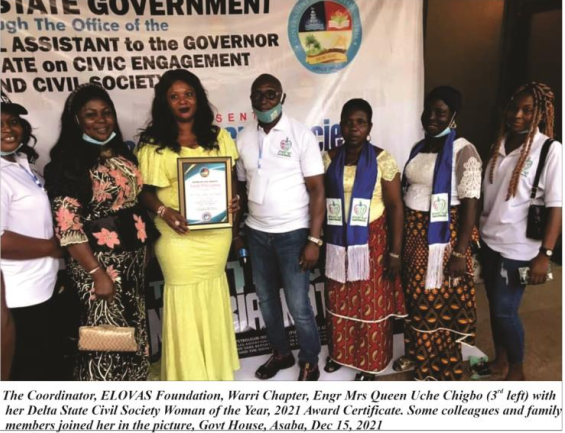 Fides gathered that the award was in recognition of what the state government described as Engr Mrs Chigbo’s immense contributions to human and societal development.

In a chat with Fides the awardee, Engr Mrs Uche Chigbo, who hails from Awka, Anambra State, said she felt honoured, elated and humbled over the award.

Mrs Chigbo, who is an Electrical Engineer and who works with Niger Benue Transport Company (NBTC) Ltd, Ovwian (a Marine Company based in Warri, Delta State) as the company’s plant manager, said she was grateful to God for the privilege to serve humanity.

The Electrical Engineer awardee dedicated the award to her mother, Mrs Esther Nzelu, who she said always looked out for people around her to better their lives, no matter the difficulties she faced.

She also dedicated the award to her husband, Mr Charlie Chigbo, for the support which she said he gave to her career and her passion, and to the children, for their understanding.

Reacting to the award, the Founder/President of ELOVAS Foundation International, QueenLady Ngozi Ekwunife, congratulated Mrs Chigbo for the honour which she described as huge and well deserved.

QueenLady Ekwunife, who said the Foundation was very proud of Mrs Chigbo over the award, expressed her delight that the awardee had been living out the ELOVAS’ noble vision of touching lives, both in her profession and in society.