Ikeugonna Eleke, Fides reporter, has been announced winner of the Fides Best Reporter of the Month, FiBROM, Award for January 2021, reports Precious Ukeje.

Eleke was announced winner by the Editor-in-Chief, Fides Newspaper, Jude Atupulazi, at the monthly meeting of the News and Editorial Department of Fides Media, Monday, February 8, 2021, at Archbishop A. K. Obiefuna Auditorium, Fides Media complex, Nodu, Okpuno in Awka, the Anambra State capital.

His story published in the January 10 – 16 Edition of Fides Newspaper, entitled “2020: Seven Events that Rocked Anambra State,” earned him the award. Other stories of his also made the mark but this came out as the best and was duly awarded. 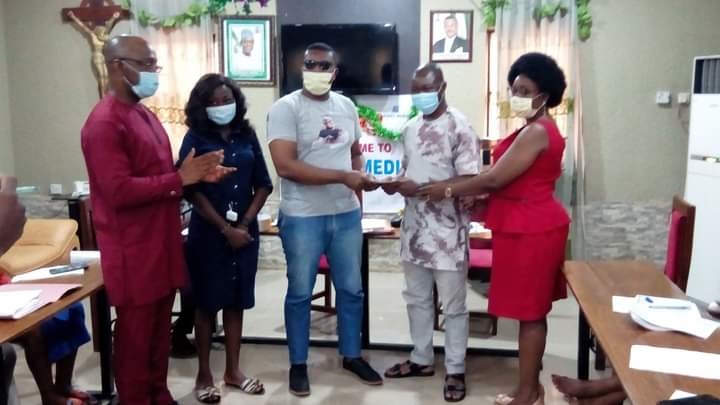 Atupulazi when he announced Eleke winner, described him as one who constantly showed appreciable dexterity in the discharge of his reportorial duties, adding that he had always exhibited excellence, where he treated every assignment with utmost importance.

For his part, the Director, Fides Media Limited, Rev. Fr Dr Martin Anusi, opined that Eleke was a versatile man who was able to delineate many of his activities despite enormous responsibilities he shouldered including his family.

He further described him as a hardworking fellow, adding that he always showed passion for his work and still made time for pleasure. He thanked God for Eleke who was ill for some time, but had recovered after treatment.

Eleke after receiving the award, appreciated the Management of Fides Media and Atupulazi, for finding his story worthy of the award. More so, he thanked other members of the News and Editorial Department, who he said continued to inspire him to do his works.

Eleke appealed to the Management to peg the number of times a reporter could win the award in a year, so that other reporters could have increased chances to win the award. He argued that he stood at advantage because of the level of experience he has on the job, and could more easily emerge winner than other cub reporters.

However, Atupulazi while reacting said excellence was not supposed to be traded on the table of mediocrity. He added that such would lower the standard, but if upheld, other reporters would make efforts to meet up with the high standard and also emerge winners.

While the award is given on the basis of creativity, investigative insight, depth of story and articulation of issues, Atupulazi had singlehandedly selected winners for the award for the thirteen months it had been on.