The proposed laboratory which is facilitated by the Senator, was donated by the National Space Research and Development Agency, Federal Ministry of Science and Technology, Abuja.

During the visit, Senator Ekwunife stated that her coming to UNIZIK was to visit the site for the proposed laboratory which, she said, would be one of the biggest laboratories in the South East Geopolitical Zone of the country.

She stated that the laboratory when completed would be useful, not just for the students, but for scholars and academics who were into research work in areas such as Chemistry, Physics, Biology and other allied disciplines. 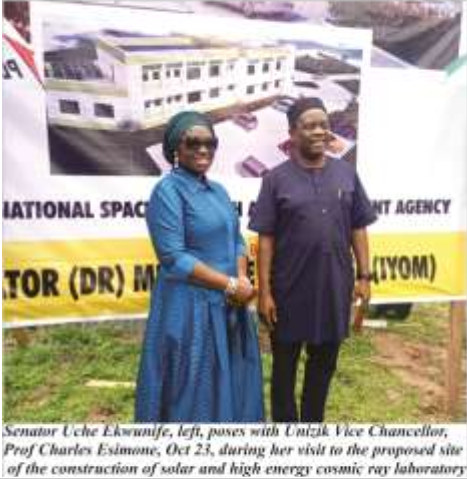 Senator Ekwunife also disclosed that the laboratory would serve as a source of internally generated revenue for the institution as some institutions within the region and the entire nation would patronize it for research and analysis.

The Senator said the project would be completed within a year by way of adequate budgetary provision for its construction.

The lawmaker thanked the UNIZIK Vice-Chancellor, Prof. Charles Esimone, for making available the land for the siting of the proposed laboratory; even as she promised to return to the institution soon to perform the foundation laying of the project.

In his response, the UNIZIK Vice-Chancellor, Prof. Esimone, thanked Senator Ekwunife for what he described as her kind gesture in ensuring that such a project was brought to the institution named after Zik.

Prof. Esimone eulogized the lawmaker for her interest and activism in the affairs of the university, the state, the zone and the entire Igbo race. Prof. Esimone said the quality of the proposed laboratory would bring people from the West African Sub-Region for research and analysis in solar, high energy and cosmic rays.

The scholar expressed his delight that the project was happening during his tenure, while describing the students of UNIZIK as lucky to have such a legacy project sited in the institution.

Reacting also, the President, Students Union Government (SUG) UNIZIK, Comrade Chukwuemeka Anih, lauded Senator Ekwunife for the initiative. Comrade Anih stated that the laboratory would aid students in research and be adequately developed academically and thanked the Vice-Chancellor and the University Management for the support.

He described the development as a dream come true for the students of UNIZIK.

Present at the occasion was the contractor from Bloomspring Ventures Nigeria Ltd; the Deputy Vice-Chancellor (Academic), Prof. Frederick Odibo; a member of the Governing Council, Prof. Meshach Umenweke; Director of Works and Services of the institution, Engr. Samuel Onwuemene; University Public Relations Officer (PRO), Mrs Chika Eneh, as well as students of the institution.