Parishes and institutions of the five deaneries that make up Ekwulobia Region Catholic Diocese of Ekwulobia (CADEK), on Holy Wednesday, March 31, gave their monetized cow gifts pegged at N50, 000 each and other Cathedraticum gifts in support to the Bishop of CADEK and the diocesan projects of the new diocese. It was on the occasion of the 2021 Annual Chrism Mass and Cathedraticum of the region.

The event which was held at the diocesan headquarters, St Joseph’s Cathedral, Ekwulobia, Aguata LGA, Anambra State, was the second one for the region under the new Catholic Diocese of Ekwulobia. 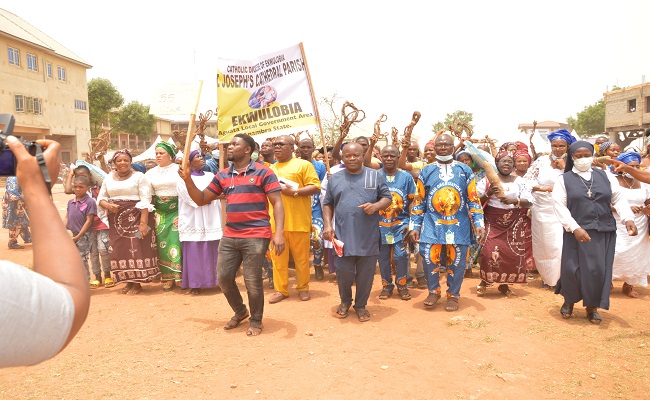 The 1st position winner of the 2021 Ekwulobia Region Cathedraticum, St Joseph’s Cathedral Parish, Ekwulobia, coming with her 55 cows pegged at N50, 000 each and other gifts during the cathedraticum.

Speaking on the occasion, the Bishop of the Catholic Diocese of Ekwulobia, Most Rev Peter Ebere Okpaleke, commended the region for what he described as her impressive participation at the cathedraticum, and assured that the gifts given would be judiciously used. He announced that building of a diocesan secretariat, the bishop’s office complex, spiritual year centre and pastoral centre, were the pressing needs of the new diocese.

Earlier in his homily,  Bishop Okpaleke, identified consecration of the Chrism Oil and blessing of the oils of the sick and that of the catechumen as well as renewal of priestly vows by the priests as the important aspects of the Chrism Mass.

Pointing out that the Chrism Mass was also a reminder of the call of the twelve apostles and the priests into the sacred vocation of ministerial priesthood, the bishop urged the priests to keep alive the vows of chastity, obedience and the priestly fraternity which they renewed.

Citing the Book of I Peter Chapter 5, the Catholic prelate, encouraged the elders of the Church to shepherd the flock entrusted unto him. He insisted that pastoral care was the greatest of all duties of priests.

‘As priests, you must always remember that you are people who are leading others in line with the revelation of Christ and people, who agreed to the revelation of Christ and those who are custodians of the grace and dignity of priesthood. Uphold the dignity of the royal priesthood which you share, be ideal collaborators and role models,’ Bishop Okpaleke advised the priests.

The Catholic prelate, who enjoined the laity to support their priests with prayers and the materials they needed for the success of their priesthood, advised the priests against giving room for the grace of God to elude them. He urged the priests and the laity to be guided by the word of God in the Book of Hebrew Chapter 12, whenever they encountered challenges in the course of their vocation.

Ekwulobia Region in the address that was signed by the Episcopal Vicar, Rev Fr Alphonsus Ezeoke, alongside the deans of the deaneries, assured of her consistent support to the new Ekwulobia Diocese.