The Catholic Bishop of Ekwulobia Diocese, Most Rev Peter Ebere Okpaleke has expressed gratitude on behalf of the entire diocesean family to the members of CADEK One Year Anniversary Planning Committee for the Erection of Ekwulobia Diocese and Installation of her pioneer Bishop for their sterling performance, selfless service, uncommon sacrifice, devotion to duty, hard work, diligence, resourcefulness, unalloyed love to God and the diocese which he described also as being ‘rare, tremendous and edifying.’

Bishop Okpaleke made this remarks on Thursday, April, 29,2021 during the official disengagement meeting held in honour of the CADEK One Year Anniversary Planning Committee held at the Diocesan temporary conference hall. 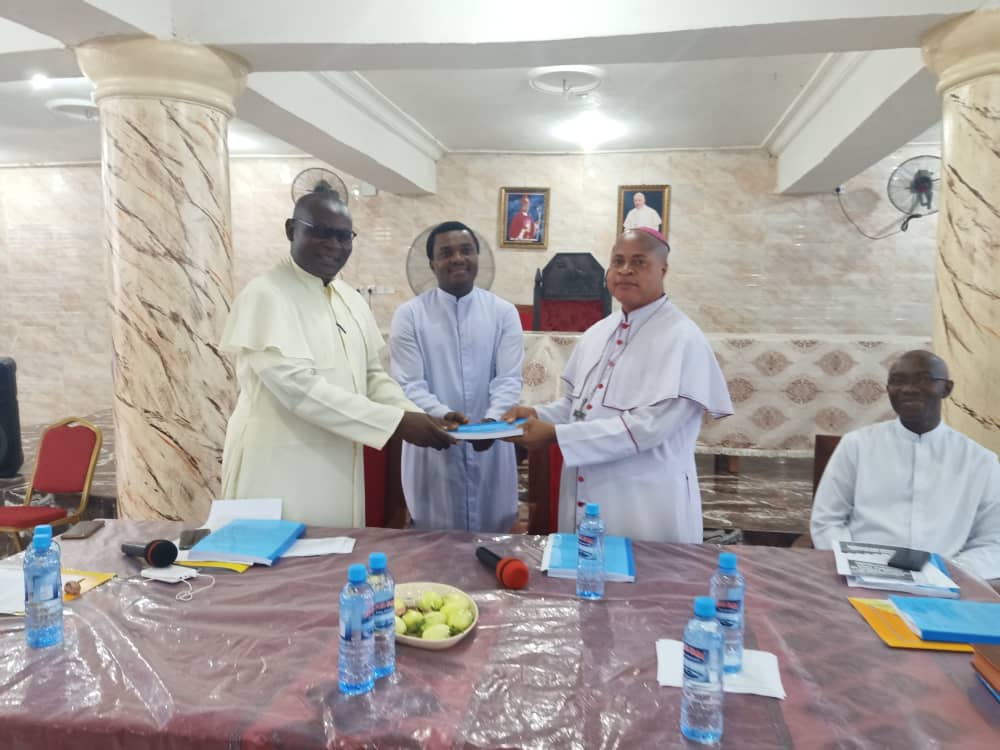 In a paper he delivered to mark the ceremony which also coincided with the one year anniversary of his Installation as the first Bishop of CADEK titled, ‘Bless the Lord all My Soul, and Forget Not all My Kindness’, the Catholic prelate dwelt on the importance of gratitude as ‘one of the greatest deepest religious emotions and one of the most attractive human quality which unfortunately is conspicuous by it’s absence in our lives as human beings’ for according to him we fail to give thanks, remain ungrateful and often unable to receive thanks.

Most worrisome is the fact that at times,we do not even try to repay good deeds done to us. It’s good to appreciate kindness at all times no matter how small, he stated while stressing that it will be strange to live in the universe without a culture of giving thanks. The Bishop therefore emphasized that going by the so much the committee achieved in so little time, they deserve more even as he prayed God to richly bless them abundantly in their lives and families.

The Bishop, who recalled that the committee was set up and inaugurated on December 5th, 2020 to among other things determine the scope of the celebration, ensure a successful anniversary, raise funds for the event and execution of diocesean projects which had as it’s chairman ,the Vicar General -CADEK, Very Rev Fr ABC Chiegboka and Fr Anthony Ezeokeke as secretary according to him, swung into action,raised over eight million naira within themselves and went on further to help attract for the diocese humongous amount of money for projects, being an outcome of a well prepared, planned and very successful one year anniversary celebration.

While expressing the formal gratitude on behalf of the diocese,he assured that work will commence soon at the chancery having earlier in the day blessed the site which they are all witnesses to. While noting that their disengagement officially today as Planning Committee Members ‘is only the beginning of another phase of their commitment’, called on them to be disposed to serve in other capacities when called upon.

Earlier on, the chairman of the committee,Very Rev Fr ABC Chiegboka while expressing the gratitude of the committee for having been found worthy to serve the diocese at that capacity presented a summary of income to the tune of #159,784,600 as grand total income, #99,477,600 as amount paid in so far and #60,307,000 as outstanding balance even as he called for more donations to meet up with the target of CADEK in future.

In his vote of thanks, the Vicar for Clergy -CADEK, Very Rev Fr Charles Umeoji thanked God for the gifts of the diocese of Ekwulobia and Bishop Peter Okpaleke, her pioneer Bishop. He noted the novel manner of approach with which the diocese is being governed in the last one year while appreciating the Bishop who called them to serve the diocese and is thankful for what they were able to achieve.

He was full of praise to the chairman and members of the planning committee for a job well-done. Other highlights at the event include free speeches by members, suggestions for improvement, appreciations,presentation of gifts and entertainment.

In a separate interview with Maranatha Multimedia, Mr Uchenna Umeanaeto (Ucheson Mary) a member of the committee, noted with joy the culture of appreciation for work done as being spearheaded today by the Bishop of CADEK as a right step in the right direction that will yield more positive dividends for the young Diocese of Ekwulobia.