The well attended 2021 ordination, was the second priestly ordination of the one year and four months old Ekwulobia Diocese. 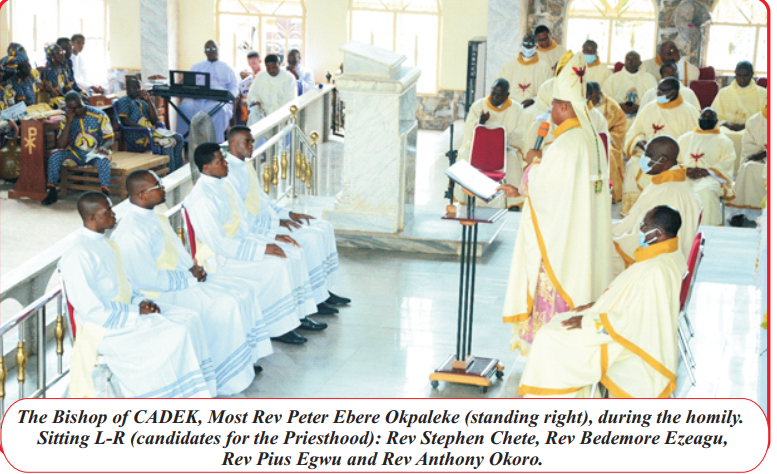 During the ordination rites, the congregation who filled the cathedral, stood enthralled as the ordinands, who prostrated for the litany of the saints, were raised to the sacred order of priesthood through the laying on of hands, prayer of consecration, as well as oaths of obedience and chastity.

Earlier in his homily, Most Rev Okpaleke commended the candidates for responding to God’s call. The Bishop appreciated those who helped the diocese in the training of the ordinands, as well as others who supported them in the course of their formation for the priesthood. He thanked the families, friends and well-wishers of the new priests, for the support they gave to them.

The Catholic prelate, who cited Philippians 3:20, thanked God for the gift of salvation, which, he said, was the greatest gift which he (God) gave to the members of the Ekwulobia Diocesan Family and others, as citizens of heaven. 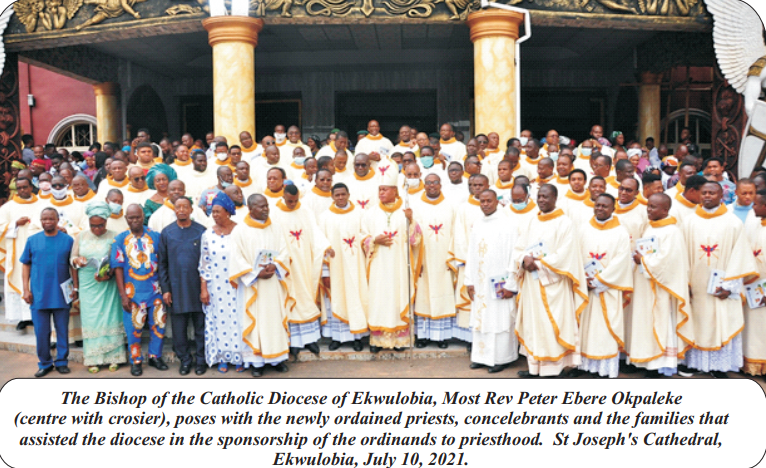 Bishop Okpaleke reminded the ordinands and the entire baptized faithful of their call to be missionaries for effective grassroots evangelization.

He explained that the vocation of the priests was not for their own personal sanctification only, but that they should help the entire people of God to receive the grace of God and the gospel.

This was even as he reminded all baptized faithful of their call to holiness, to help sanctify others, and to bring others nearer to Christ.

The Bishop, who further reflected on the gospel of the ordination, Mt 9: 35-38, noted that the ordination of the new priests was a reflection of prayers answered by God for more labourers in the Lord’s vineyard.

While agreeing to the fact that there would be challenges for the priests, the Catholic prelate reminded them of the expectation that they depended totally on God who called them and ordained them as priests into the Presbyterium of Ekwulobia Diocese and the priesthood of Christ. 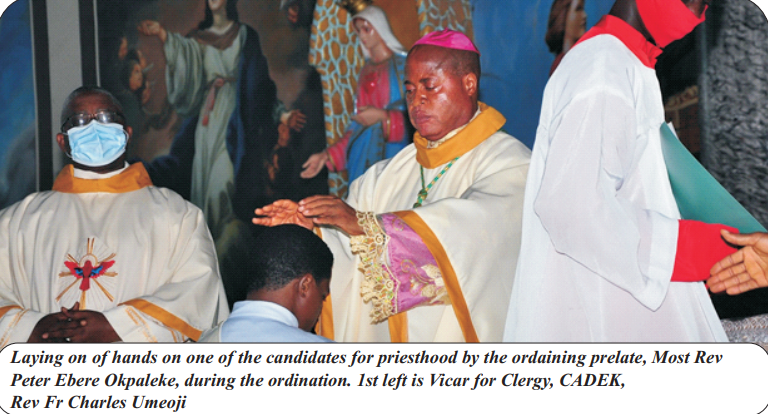 ‘In the work of evangelization, do not sit, look and wait for the people of God. Instead, arise from your comfort zone and go to them as he (God) has directed you. The life of God’s messengers is similar to that of the hawkers. You have been commissioned, so carry the gospel of Christ, penetrate every corner of Ekwulobia Diocese and beyond and spread the good news to all,’ Bishop Okpaleke, who cited Jeremiah 5: 1, told the priests.

Addressing the priests further, he said, ‘All have the right to the gospel because God wants everyone to be converted and to be saved. By God’s authority we are sending you to the rich and the poor, the men and women, the young and the old, the well-educated and those with little or no schooling; those in positions of authority and those without God’s power, so that they will experience God’s power and the work of God.

The men, women and youths need to hear about God. The Lord himself has made small and great, and provided for all alike. See everybody as equal before God and deliver the good news.’

While noting that God had anointed them and gave them the fullness of priesthood, the prelate charged the new priests to exercise their ministry among those who had lost hope due to personal, family and societal crises, as well as others who had taken the wrong path and were written off by society.

He said God might use them to change the condition of the people for the better.

The bishop, who committed the new priests unto the care of God, urged them to be guided by the word of God in Acts of the Apostle, Chapter 20, from Verse 17 and in I Timothy, Chapter 4. He encouraged the new priests to begin their ministry with the spirit of the Lord which they received, train themselves in Godliness, avoid distractions, be committed to their vocation, take care of themselves and as shepherds, take proper care of the flock of God entrusted unto their care.

He urged the laity to remember the priests in their prayers, book masses for their priests so that they would succeed in their vocation.

The new priests celebrated their first solemn thanksgiving masses in their home parishes on Sunday, July 11, 2021.