The presbyterium of the new Catholic Diocese of Ekwulobia (CADEK), led by the Chairman and Bishop of CADEK, Most Rev Peter Ebere Okpaleke, last Monday, January 11, held her 2021 New Year get-together.The event which was held at St Joseph’s Cathedral, Ekwulobia, was the first for the ten month-old diocese.

Fides gathered that the Catholic Diocese of Ekwulobia, at the event, celebrated her priest, Rev Fr John Uchem, who clocked 50 years in priesthood, as well as celebrated nine of her 1996 set priests, on the occasion of their priestly silver jubilee anniversary. 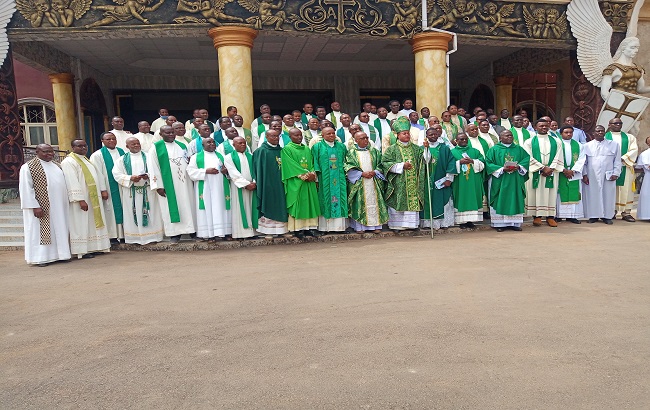 The Bishop of Catholic Diocese of Ekwulobia, Most Rev Peter Ebere Okpaleke (8th from right, front row), poses with some priests of the diocesan presbyterium, after the Holy Mass to mark the first New Year Get-together. The bishop is flanked on his right by the golden jubilarian, Rev Fr John Uchem, and on his left by the primus of the 1996 set (the silver jubilarians), Rev Fr Damian Okeke. Other silver jubilee celebrants, are putting on chausible, St Joseph’s Cathedral, Ekwulobia, Jan 11, 2021.

Leading in the concelebrated Holy Mass to mark the double event, the Bishop of the Catholic Diocese of Ekwulobia, Most Rev Okpaleke, in his homily titled: ”Jesus: The Radiant Light of God’s Glory”, urged his priests to live up to the demands of their calling as close collaborators of Christ’s divine project. The Catholic prelate stressed the need for the priests, who, he said shared Christ’s inner circle like the apostles, to ensure that the values of God’s kingdom shone in the world.

He advised the priests against falling victims to those he termed sheep among wolves, so as to minimize instances of cooptation, which, the bishop said, blighted the sacredness of the Gospel which was entrusted unto their care.

Bishop Okpaleke tasked all on the formation of conscience, which, he said, was a factor necessary for the transformation of any society, noting that without people of character who were ready to do the right thing, investment in politics, infrastructure and social transformation, would risk being sabotaged.

As the Anambra State governorship election draws near, the Catholic prelate advised the priests to restrain from exposure to political gatherings and activities which might cause them to compromise on principles. Bishop Okpaleke prayed for the grace that would enable the priests to be what he termed bearers of the radiance of God’s glory in the political sphere in particular and in life generally.

He exhorted all against the quest for relevance which he identified as the root of false steps that people took in life, but, to instead, strive for self-mastery made in innocent disposition for the love of God and humanity.

In his remarks, the Vicar for Clergy, CADEK, Rev Fr Charles Umeoji, congratulated the golden and the silver jubilee celebrants, describing them as being privileged to have been the first set that celebrated their Jubilee anniversaries in the new diocese.

Rev Fr Umeoji welcomed the diocesan priests in diaspora and prayed that the event would spur the new Diocese on the path of renewed vigour and progress.

In their various speeches, the golden jubilee celebrant, Rev Fr John Uchem, and the parish priest, St Michael’s Parish, Uga, Rev Fr Longinus Egbeonu, who spoke on behalf of the silver jubilee celebrants, thanked God for his grace and sustenance on them for the years they had spent in the vocation. Rev Fr Uchem, was ordained on April 17, 1971.

Rev Fr Egbeonu, who was ordained a Catholic priest on August 17, 1996, described his 1996 priests set as greatly blessed. The priest thanked God for keeping the 26 of them alive up till date.

Highlights of the event were a preparatory report on the March 5, 2021 one-year anniversary of the Catholic Diocese of Ekwulobia, presented by the chairman, Anniversary Committee and Vicar General, CADEK, Rev Fr Prof Anthony B.C. Chiegboka; presentation of gifts to the jubilarians and bishop’s Christmas gifts (lucky dip) for the priests.