Obiano, who received them in his Aguleri home, Anambra East Local Government Area, on Monday, June 7, applauded the team for their feat at the festival in spite of the challenges in the build up to the games.

Fides gathered that the Anambra contingent who won a total of thirty seven medals, including six gold, nine silver and twenty-two bronze medals were presented to the Governor by the state chairman of Sports Development Commission, Mr. Tony Oli. 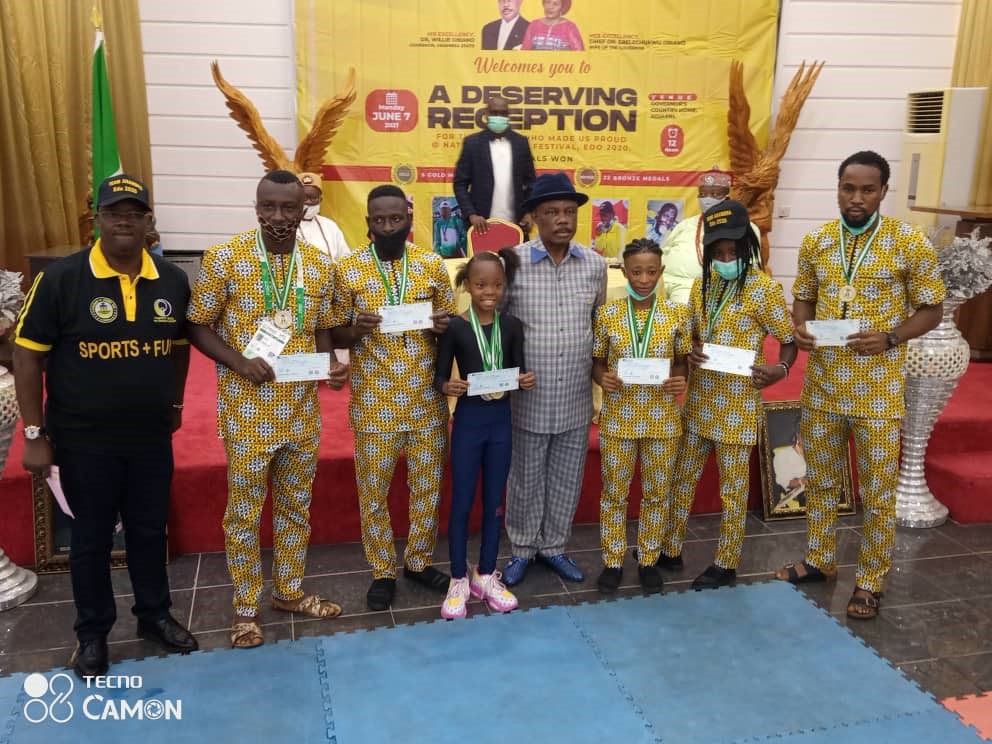 Gov Willy Obiano, 4th from right, poses with some members of Team Anambra who excelled in the last National Sports Festival held in Edo State.

Obiano gifted the gold medalists with the sum of N1 Million each, silver medalists received five hundred Naria each, while the bronze medalists went home with two hundred and fifty thousand Naira each; all amounting to N16 million.

The coaches also received cash rewards of about N3.5 million ranging from N1 million for the best coach at the festival and N150, 000 for bronze winning coaches.

The cynosure of attraction was 10-year-old Stephanie Onusiriuka, the gymnast wonder kid at Edo 2020 who won one gold, two silver and one bronze and got a total of N2. 250 million for her exploit.

Onusiriuka held the governor and the rest of the audience spellbound with a two-minute display of gymnastic skills.

According to Governor Obiano, his administration would continue to advance sports development and would ensure that the necessary facilitates were put in place to make it easier and accessible to all who had passion in the field of sports.

The Governor congratulated Team Anambra for making the state proud, asking those who won to always defend their medals, while calling on those who won silver and bronze to strive to make gold at the next event; even as he urged other participants who did not win any laurels to train harder.

‘I am very proud of you all, particularly that little girl that packed so much medal; she has a long way to go and the sky is her limit.

‘I want to commend everybody that won gold, silver and bronze. The challenge you have is that if you won bronze or silver, you must strive to win gold next time and if you won gold, you must defend it next time,’ he said.

Tony Oli, Chairman of Anambra State Sports Development Commission, said the athletes and coaches did themselves proud by ensuring that the state surpassed its own record at the Abuja festival in 2018.

Oli thanked the governor for providing the logistics needed to ensure that Anambra did not only participate but competed favourably. He said some athletes from Anambra had been invited to the national camp and would be part of Nigeria’s contingent to the Olympics.

Mr. Oli, while applauding the Governor for supporting the commission, recalled that when he assumed office, Team Anambra had won only one medal in the competition they attended.

He said that the present administration had repositioned Sports in the state, while revealing other programmes of the commission in the coming days, including the finals of academicals, Anambra State Volleyball League, Anambra Basketball League, among others.

Speaking to the Journalists, little and energetic Stephanie, who was visibly happy, revealed that the 2020 National Sports Festival at Edo was the first National Festival she won laurels and said she started training at the age of two while she commenced professional gymnastics training in 2018 at National Stadium, Abuja.

She expressed optimism that she would train harder for more laurels and greater heights, saying that she hoped to represent Nigeria someday at the Olympics.

A physically challenged Njideka won silver medal and qualified for the Olympics, while Chinecherem Nnamdi, a gold medalist for Javelin; who broke the record by obtaining 73.11, emerged as the national gold medalist in Javelin and would be representing Nigeria at the Olympics.

The traditional ruler of Aguleri, Igwe Michael Idigo; Special Adviser to the governor on Disability Matters; Barrister Chuks Ezewuzie, among others, attended the event.

The highpoint of the event was the presentation of cheques to 10-year old Stephanie Onuzurike who won one gold, two silver medals and one bronze, and is presently the overall best gymnast in Nigeria.