Echoes of the Yuletide

The Christmas festivities have come and gone and the New Year has even come but perhaps it’s time to appraise the major things that happened over the yuletide; from what I’ll describe as the ridiculous to the good.

The ridiculous: Government’s directives/bans that mean nothing

Every year just before Christmas, the Anambra State Government usually gives some directives against certain actions which are considered not healthy for the peace of the state. Such include the ban on the use of knockouts and masquerading on the roads.

But we know that the ban on knockouts or fireworks is never adhered to. It even looks as if the more the government bans it the more the fireworks business booms. Almost all the shops sell them and people who attend night Masses or services are put at the mercy of miscreants and mischievous youths who harass them with such knockouts. And each time, nobody is arrested, not to talk about being prosecuted.

The aim of banning the use of fireworks is probably to enable the police and other law enforcement agencies to know when actual criminal activities are going on and be able to distinguish between real gunshots and fireworks or knockouts.

During the just ended yuletide, the ban was observed in breach as sounds of fireworks rented the air in many communities and cities, making it really difficult on many occasions for people to know if there were robbery attacks or not. Perhaps, government should consider stopping the bans in order not to ridicule itself. If not, government should set up task forces to monitor its directives and sanction offenders.

Ban on masquerading on the roads

The Anambra State Government had also warned masquerades and masqueraders against doing their stuff on the roads in order not to hamper the movement of traffic and inconvenience road users. But this was also observed in breach. In Abagana, during the community’s annual Ede Aro Festival, a terrible traffic jam was triggered after many masquerades and their followers trooped to the Awka/Onitsha Old Road. 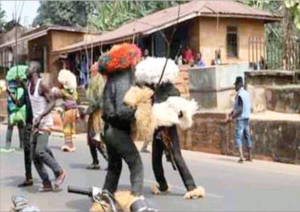 For many hours commuters and other road users were trapped as the masquerades began to extort money from car owners and commercial drivers. One of my colleagues told me how her car overheated and had to be pushed away from the road while she waited in the gridlock caused by the masquerades. I heard that it was also the case in some other communities during similar festivals.

Now, it is absurd and totally unacceptable that anyone could purposely stop others from moving freely about in the name of culture. The village squares are there for such festivals and the fact that the offenders were warned against doing such adds fuel to my anger.

I think that to check against this, the state government should henceforth sanction the town union leadership of any community that allows such. Either that, or such communities should be made to produce the offenders for proper sanctions.

No community should be bigger than the state government and until we start doing the right things government should set up task forces to beat those who are intransigent into shape. There is no use for government to announce bans or directives it can’t enforce. That will send the wrong signals and the chances are that in future no one will take any government directive seriously.

Amid the gloom and doom occasioned by the country’s poor economy has come rising criminality. Anambra State is not left out. Despite all efforts by the state government to safeguard the lives of the citizenry, criminal elements were still able to ply their deadly trade within the period in review.

People were still kidnapped and killed across the state, while on one occasion a police station in Ihiala was attacked and burnt. The president general of Obosi Community was also killed in his car; while cult attacks also went on unchecked, with four people gunned down somewhere in the Okpuno area of Awka. Why humans could be acting like beasts is what has continued to confound me.

I will at this juncture restate my position on the role communities can play in crime fighting. I’ve always held that every crime is local and for criminality to end, communities have to lead the line in identifying and fishing out bad elements in their midst through a foolproof method. So let the government sit down and plan with the various communities to uproot this menace.

Save on occasions when masquerades ran riot on the roads, traffic flowed freely in most parts of the state. Some communities like Enugwu Ukwu set up local traffic wardens at their own expense who ensured that traffic flowed freely. This was not the first time the community would do this and I give them kudos for that.

The officials of the Anambra Road Traffic Management Agency (ARTMA) were also up to their task and I could see them working late into the night as they helped in ensuring that traffic flowed smoothly. That is the way to go.

Where are the people?

One noticeable thing this yuletide was the poor number of returnees. At other times, one would notice that from the 24th of December the roads would be locked in heavy traffic as those returning from outside strive to make it home. Even after that, traffic continued to be thick, mostly in the evenings, as people went about such activities like traditional marriages, weddings and the like.

But this time the roads were not as busy as before, probably because of two factors: high cost of petrol and the fear of being kidnapped. Before then, some people had already started holding such ceremonies outside the state because of the security situation. It is expected that if things don’t get any better the situation will continue to worsen.

If anyone can claim to be the lord and master within this period such person must be into oil and gas. It was a season when petrol stations dealt with people anyhow. You could buy fuel for N280 in the evening at a particular station only to find out the next morning that it had increased to N300. It was as though petrol stations took delight in making motorists suffer.

But the government did little or nothing to cushion the effects of this on the people, and so the petrol stations had a field day and sold their products at any price; changing their meters every now and then to reflect the latest price. In some places fuel sold  as high as N400. The people cried for help but none came.

They are still crying and if the government fails to find a solution, many may have to start trekking to work and that is for those who don’t live far away. Any sort of intervention can do and government should immediately do this.

Within the past week, news filtered in about the attack on the convoy of former Imo State governor, Ikedi Ohakim, in Imo State by gunmen who killed four of his police escorts and the driver of their vehicle. Ohakim was in a bullet proof car with his son and daughter during the attack and they managed to evade the attackers even as they were pursued. Speaking later, Ohakim thanked God and his bullet proof car for what he described as his miraculous escape.

Before that attack had been a similar one on Senator Ifeanyi Ubah in Enugwu-Ukwu in Njikoka LGA of Anambra State. As in the case of Ohakim, Ubah escaped in his bullet proof car, while many of his police escorts and personal aides lost their lives.

From these two incidents, it is like the big boys are protected by their bullet proof vehicles while their aides and escorts become cannon fodder. If the big boys have found a better way to protect themselves, why then do they require escorts? Wouldn’t it be a better idea for them to travel or move about alone, secure in the knowledge that their bullet proof vehicles would protect them?

Wouldn’t it be a good idea for the police to demand that their officers attached to politicians and other ”big men” also be provided bullet proof vehicles for their protection? Is there any sense in police officers and aides being exposed to danger which can be avoided?

Perhaps the police authorities should look into this before the rank and file of the police are decimated by gunmen.

Finally, as the Year 2023 kicks off, it is my wish that all you, my readers, will have a fruitful year. You will come to no harm and God will bless your endeavours. In Jesus name we ask, amen!