Echoes from my Ghana Trip

The date was September 18 2021 and the country was Ghana. I belong to a Non-governmental organisation known as Okpotokpo Adaigbo Niile Worldwide. It is an organization that has an assemblage of all female, married and single, of Igbo origin from the five Igbo states and four Igbo speaking states in Southeast, Nigeria who are exceptional, quintessential, exemplary, industrious and responsible,  residing anywhere in the world and sharing in the common goal as enshrined in the vision, mission and aims of the organization. 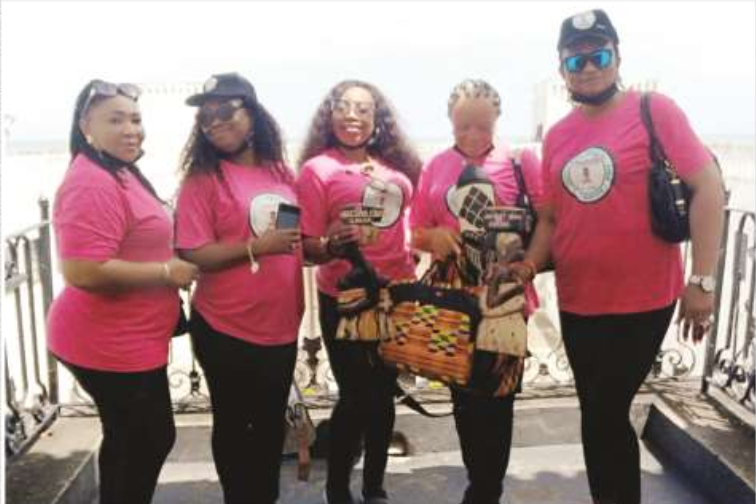 We are humanitarian and take good care of the less privileged in society. We are identified with governments that have integrity, transparency and focus.

I happen to be the Vice President of that great organization and because the Founder and President of the organization, Iyom Chinelo Cynthia Nwokolo was billed to be conferred with a chieftaincy title by His Royal Majesty, Igwe Dr Chukwudi Ihenetu, Eze Ndigbo Ghana, we had to prepare to go for the event and it was quite worthwhile.

We also held an investiture ceremony in the Eze’s palace as we made him our Diaspora Grand Patron.

It was the day after that, that our host arranged for us to go on tour to Cape Coast where we visited the famous Elmina castle.

The castle was one of the places where slaves from West Africa were kept in dungeons by the slave masters for onward journey overseas.

A guide took us round the castle where I heard one of the saddest narratives ever, about the dark history of our ancestors and how they were bound in chains for years until they either died in their cell or till it was their turn to be  sold out like mere commodities to slave merchants.

There was a particular part of the dungeon where about 150 young ladies were kept under lock and key in chains. They never bathed. They passed urine and faeces in the same place. Even when they had their monthly flow, it meant nothing to their white captors or Slave Masters, if you will. They were left in the dungeons, bound in chains like animals.

The dungeons had this smell about them and I found it strange that even several years after every single slave died or left the dungeon, it still had a repulsive smell about it.

Back to my story. We were shown a well filled with water. That was the water used to bathe them when necessary. The water was also used for cooking for the slave masters, drinking and bathing. Now, one thing our guide said which left me really depressed was that the only time these black women ever had their baths was when the white slave masters felt the need to have sexual intercourse with them with or without their consent.

That is the only time they would be given water from the well to wash the dirt off their bodies for the pleasure of the slave master.  We were shown the bedroom of the man that was called the Governor back then. He lived in the Castle. We saw his balcony where according to our guide, he will stay and watch the black female slaves while they worked to make his choice for sexual activities.

Any lady he pointed out will be taken out of the dungeon washed with water from the well, then taken to his bedroom. After satisfying the governor she will be taken back to the dungeon and bound back in chains. Some of the ladies ended up being pregnant and it still didn’t change the fact that they were slaves undergoing one form of torture or the other.

They still went through the hard labour, even with their pregnancies. The consequences, according to the guide, for saying no to the governor’s sexual advances was severe torture.

We were shown another dungeon where the ladies were punished. For any lady that refused to give in to the sexual demands of the governor her punishment will be that she will be chained to a very heavy metal and will remain there until her punishment ended. It might run into days or weeks, depending on the mood of the governor.

We saw the section where men were kept. We saw the metal bars. They were still very strong. It was unlikely that any slave would even attempt escaping from what I saw. We were shown the place called ‘point of no return’. It was the exit step to the waiting boat that usually took them to their new slave masters after collecting money in exchange for them. Back then, it was closer to the castle but that was decades ago. Presently, the water has receded and gone back, by nature. They used to bind these slave in chains and then, use the small boats to ferry them to the bigger boats in the sea.

There was another dungeon where slaves that dared to fight for their freedom were kept until they were killed by the slave masters. On top of the door of that dungeon was an image of a skull and a sword.

It was also called the Point of no Return. So anybody who was taken in there knew that his or her death was imminent. Nobody ever came out of there alive. I felt a certain anger when I looked at the cell of the point of no return. I realized it was different from the other cells we saw.

This was really dark and it had only one tiny window so I could imagine how suffocating it was for them.  I also tried to put myself in their shoes remembering how the floor of the ladies’ cell was so hard with the tiny window that did not have the luxury of ventilation. They really had it tough, hopeless and rough.

You know it was a very sad experience for us and I personally thank God I was not born in that dark era.

As we made it back to our hotel, I was quiet for the 3 hours it took our driver drove to the hotel. I was sad. I was depressed. The smell of the dungeons lingered in my nostrils.

Even days after, I could still faintly perceive the smells of those dark dungeons. I couldn’t remove my mind from the rough floors where my female ancestors lay to sleep, pass urine, pass faeces and even sat on their own blood during their menstrual flow. I wondered what their crime was, for going through such inhuman treatments.

I saw some wreaths kept by tourists in one of the dungeons, in memory of all of the slaves that died while in detention by their captors. I felt bad that I didn’t have any wreath or flower to keep in their memory.

I however prayed and hoped that their souls were resting peacefully. That was the least I could do. I still remember everything about the Elmina Castle and the memories, I know, will never go away.

I salute all black women all over the world going through all sorts of humiliation and slavery, especially in their homes. I hope you all draw enormous strength from your heritage! It is a strong one. Don’t ever accept to be defeatist! Look your problems in the eye and face them headlong. It is your right to excel, win and live like the Black Queen you are! There is power in every woman. Use yours positively wherever you find yourself!!!