Ebubeagu is One Year Late

When the Southeast governors finally announced the formation of the long awaited Southeast Security Outfit which they christened ”Ebubeagu”, it came one year late; precisely three months and two days later than the one formed by their counterparts from Western Nigeria. Are we in competition with the West? No! But then this has become a matter of utmost importance as it concerns the safety of a people. And when a major geographic zone very quickly responds to the threat posed by the almighty herdsmen to their people, you would not be blamed if you looked at your own leaders to respond in like manner.

When the governors of the          Southwest states had read the writing on their wall, they wasted no time in coming out with what they called Amotekun or leopard, as their own indigenous security outfit, to safeguard their people. After that, the governors of the Southeast made a show of coming out with their own but it ended up as what it was: a show. That show petered out when the lights went out.

It wasn’t any surprise that thereafter, following the security outfit formed in the West, and following the discomfort it caused the herdsmen, their operations in the West began to wane, just as the theatre of action gradually began to shift eastwards. The fact today is that the dreaded Fulani herdsmen have begun to make bolder incursions into Igbo heartland and have virtually encircled the Southeast. People  are now

regularly kidnapped by them in every Southeast state. Those not being kidnapped are being butchered like nama. Was it not the other day that about 25 people were cut open with machetes in Ebonyi State? Was it not the other day that a Catholic priest was kidnapped in Imo State? What about the five young men kidnapped in Anambra (Aguleri/Nando border) on their way from a wedding? Long before that, the President General of Anaku Community in Anambra State was kidnapped and later killed.

I don’t, of course, want to talk about the ”unknown gunmen” who have chased away all the security personnel in the zone from the roads and forced police stations, government houses and correctional facilities to look like places under siege. These same unknown killers have accounted for the deaths of many security personnel across the Southeast, with the most daring attacks being recorded in Owerri and Isuofia in Imo and Anambra States respectively . In Owerri, they set fire to the State Police Command, burnt their vehicles and attacked the correctional centre in the town, freeing hundreds of inmates. They would also later attack another police station in the state. 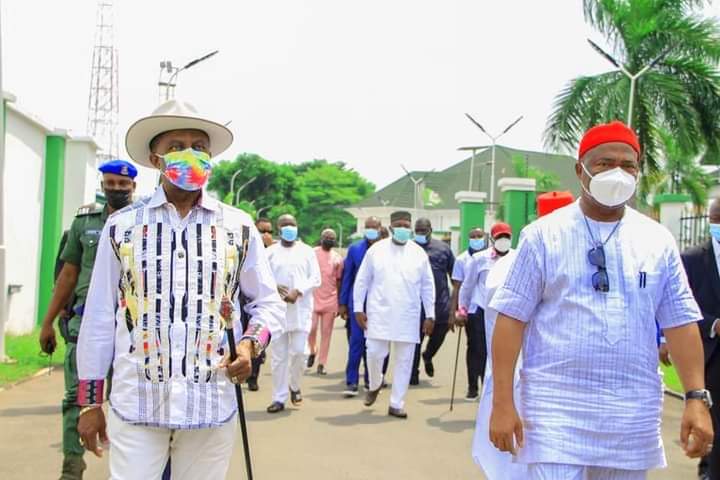 In Anambra, they stormed the venue of a town hall meeting by the governorship aspirant on the platform of the All Progressives Grand Alliance, APGA, Prof Chukwuma Soludo, in Isuofia, Aguata Local Government Area, and pumped hot lead into the bodies of three of his police aides, killing them instantly.

Would it be so wrong to posit that had the Southeast governors been able to form what they just formed last Sunday, a year earlier, most of the things that happened recently would not have happened?

Rather than unite and fight for their people, some of the Southeast governors have been more interested in feathering their own nest. Their chairman (that man should resign), Dave Umahi from Ebonyi, watched hands akimbo as Fulani killers ran riot in his state, killing and plundering. He could not do much because he had just joined the ruling All Progressives Congress, APC, in pursuit of his presidential ambition.

He hardly raised his voice for fear that Abuja would no longer look upon him as a friend. However, what he doesn’t know is that those in Abuja are not dumb. They see him as a lackey, the same way they see the Imo State governor.

Thus, because of personal ambition, Umahi, the leader of the Southeast Governors’ Forum, dilly dallied in rallying his troops for a counter offensive, leading to more bloodletting.

It was only after the land of the rising of sun had been saturated with the blood of the innocent that Umahi and his colleagues decided to wake up to the realities of the day. But they committed a bad blunder by inviting the nation’s security chiefs, including the Inspector-General of Police, to the meeting. How could they invite the very people suspected for their roles in the kid glove treatment of those killing us? What good will come out from such a meeting? Is this the best way to awaken from their slumber?

While they slumbered, Nnamdi Kanu, the leader of the Indigenous People of Biafra, IPOB, had gone into action by forming his own security outfit called Eastern Security Network (ESN). He simply stole the shine from the governors by coming to the aid of his people in time of danger and today, the governors can only play second fiddle to him. Too bad.

Even the name given to the security outfit formed by our governors is laughable. What business have we with the aura (ebube) of a lion when we should have been talking about Agunechemba (the lion that protects its people)?

Although some folks will argue that there’s nothing in a name; yet, there still is something in a name which was why they came up with a name in the first place. But this is by the way.

Perhaps the Southeast governors want us to give them a standing ovation or to climb the tallest trees and jump down from them in ecstasy. Fa fa fa…foul! Apologies to Chief Zebrudaya Okoroigwe Nwogbo.

That our governors could only be coming together now well after a year that their counterparts from the West formed theirs is nothing short of shameful. It portrays them as unserious and unfeeling as a group. For sure, individually, some of them have been doing their best to manage the situation. At least, our governor, Willie Obiano, has invested a lot in security; even if all his efforts were blown away when

the real test came. But we can recognize the effort and good intention.

So also have other governors tried on their own to ensure that their people are protected. But my beef with them is that as a group, they failed to put together a cohesive security arrangement that would make the zone impenetrable. By failing to look beyond their noses, they allowed those killers to infiltrate our territory.

The danger of this is that those invaders are losing their fear of us; if not, how on earth could they be operating this freely in our backyard? Can our own people try that in Borno or Birnin Kebbi? Who born them!

Now that they have infiltrated our land, what do we do? This is no time to continue flexing muscles with Kanu and his ESN. This is a time to throw away our egos and work together for a common goal which is to secure the East from our sworn enemies. It is now dangerous to travel to some places in the East, Just as it had long become dangerous to do so outside the East. People now choose where and where not to attend events. I personally did not attend the wedding of a colleague because of this fear. (Who will pay ransom for me if I’m kidnapped?)

I’m therefore saying this is the time to walk our talk, come together as a people and fight this battle. Kanu should quit treating our governors and elders with contempt. They remain the only constituted authorities that we have at the moment. He should submit himself to dialogue if the opportunity comes. The Southeast will look more formidable if our enemies know we are working together.

But from what I have seen so

far, the governors have been their own greatest enemies; no thanks to some of the weird decisions they keep taking; decisions like allowing some of the service chiefs to be part of the deliberations for the formation of Ebubeagu.

I’m pretty certain that Umahi was the brain behind that invitation, seeing that he’s so anxious to please his new masters. I think the Southeast governors are under the unholy influence of Umahi who is their chairman.

The decision of the Southeast governors to include the security agencies in their meeting has drawn the ire of many of their people who are now beginning to doubt the chances of Ebubeagu being a success.

Until the rest of our governors are able to extricate themselves from Umahi’s cunning and manipulation, they will continue to come under criticism. But they can redeem themselves by ensuring that Ebubeagu works.

One of the sure ways it will work is to mobilize the communities in the Southeast to identify all the bad elements in their midst, give them a deadline to denounce crime or leave their communities; failing which they will be rounded up. Such rounding up should take place across the Southeast on same days. Do this and see if there won’t be a difference.

This tactic had worked in the past like magic. I suggest this because every community knows its bad elements. No doubt about this. It is therefore those communities that can easily flush out those bad elements.

The need to do an in house cleansing first is very important so that we won’t be fighting enemies on two fronts; that is from within and from without. If we effectively get rid of the bad elements within us, we can then move as one to confront the ones outside.

If we succeed in making Ebubeagu work, it will not matter whatever name we call it.