Easter Call To Newness Of Life

Easter Message of His Lordship, Most Rev. Peter Ebere Okpaleke, Bishop of Ekwulobia

It is with joy that I wish you all, a happy Easter celebration. This is our first Easter as a diocesan family. Just as our Diocese is new, I want to remind all of us that Easter is a call to newness of life which can be achieved through concern for others in love out of obedience to God. The news of the resurrection broke on the first day of the week.

Some women – Mary Magdalene, Mary Mother of James, Salome mentioned in the Gospel of Mark and Joanna in the Gospel of Luke – after the Passover, went to the tomb to anoint the body of Jesus. They were wondering how to roll the stone away from the mouth of the cave, because unlike ndi Igbo, who bury the dead in the ground, Jews buried their dead in caves hewn out of rocks and covered with a stone. The women discovered that the stone that covered

the tomb of Jesus had been rolled away. When they peered inside and did not find the Lord’s body, they presumed the worst had happened – the tomb had been raided and the Lord’s body taken away or stolen. Seeing someone she thought was a gardener, Mary Magdalene went to ask for help. In the

encounter, the unexpected happened. She heard her name: Mary! And the voice was unmistakably the Lord’s. In a split second, everything changed! With excitement, she responded, “Rabbuni!” and by impulse wanted to clasp the Lord. She was however instructed to go and tell the brothers that the

break the news to the brothers would be an understatement. You can also imagine the change that took place in the brothers: from sorrow to disbelief, to amazement and then to joy. The disciples on the way to Emmaus captured it all. On their way out of Jerusalem, they were downcast and despondent. 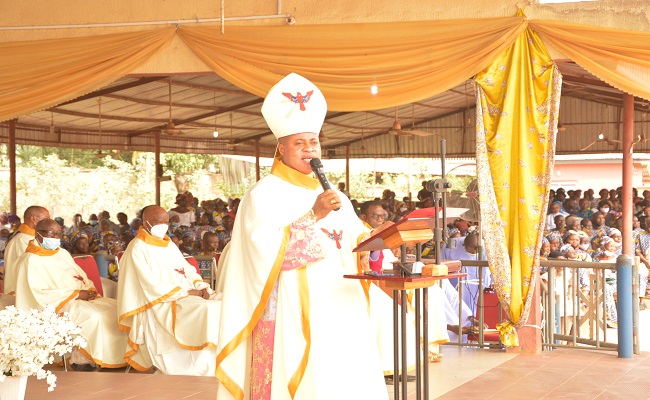 The Bishop of the Catholic Bishop of Ekwulobia Diocese, Most Rev Peter Ebere Okpaleke, addressing the people of God on the occasion of the 2021 Chrism Mass and Cathedraticum of Ekwulobia Region, St Joseph’s Cathedral, Ekwulobia, March 31, 2021. Photo: Ifeoma Ezenyilimba

The one they thought would save Israel from the Romans had been cruelly put to a shameful death. However, when they recognized Jesus at the breaking of the bread, everything changed: they were re-invigorated; they recalled that their hearts were burning within them as their traveling

companion explained the Scriptures to them (Lk 24:32). There and then, with all fear and weariness gone, they walked back to Jerusalem to share the good news. The biggest change took place in Jesus. He was transformed. He shed the limitations of his earthly existence. Walls and doors could no longer hinder him. He could stand in the midst of the apostles even when they had all the

doors locked. Yet, he was not a ghost. He retained his body although transformed. He asked Thomas to put his finger into his pierced hands and sides (Jn 20:27) and invited his disciples to “touch me and see for yourselves: a ghost has no flesh and bones as you can see I have.” He even asked them

for something to eat and ate a piece of grilled fish before their eyes (Lk 24:39-43). All these show that the resurrected Jesus is the one who walked the dusty streets of Palestine more than 2000 years ago, although transformed. It is this transformation, this newness, that we celebrate. Easter is an event of epic proportion with cosmic significance.

The first Easter marked the resurrection of the Son of God from the dead; the setting of God’s seal of approval on the life and choices of Jesus Christ; the glorification of He who humbled himself even to death on the cross in obedience to the Father and out of love for humanity. The first Adam fell because he did not trust God enough. He did not want to surrender himself or yield control of his life and destiny totally to God. He wanted to reserve

some decisions to himself and to do things guided by his own vision, insights and wishes. He desired a measure of sovereignty and felt pitched in a kind of secret competition with God. That was why he rose to the serpent’s bait that his eyes would be opened, and like god he would know good from evil (Gen 3:5).

To achieve his coveted godlike status, he would first go against God’s instruction. Of course, he did and instituted a tradition of self-enclosure and defensive opposition to the truth and to God. Jesus, the second Adam, when he was in the flesh, was truly a human being. He was tempted (Lk 4:1-13) as all of us are (Heb 4:15). These temptations bordered on the fundamental option for his life: to center the economy of his desire on self, its comforts and affirmation or not to do so.

He was tempted to satisfy his hunger, to display miraculous powers and to be acclaimed powerful in earthly terms for the purpose of self-projection. However, Jesus made God the reference point of his life and activities, all the way to the end. The toughest of the ‘temptations’ was the passion and subsequent physical death of the self. Would he rebel and assert himself or yield up his life in love?

He agonized over the decision so much so that his sweat dropped like blood (Lk 22:44). In the end, he surrendered once again, and asked that God’s will be done (Lk 22:42). Thereafter the betrayer came and gave him the kiss that started off a chain of events that culminated in his agonizing death on the cross.

On the third day, however, the Father intervened, raised Him from the dead and thus vindicated His life option of trust and total surrender to God’s will out of love for humanity. The resurrection of Jesus is a pledge that God vindicates any life or effort made for the good of others out of love in obedience to God’s will.

Unfortunately, a ‘me-first’ mentality, the opposite of Jesus’ example (1 Pet 2:21) is currently promoted and justified. There is a talk of a ‘selfish gene’ intotal neglect of the care and concern for others that one observes even in nature. The Igbo wise sayings, onye arachaghị ọnụ ya, ụgụrụ arachaara ya (unless you look after yourself, no one would) or onye ube ruuru ya rachaa (make use of any opportunity for one’s benefit) are stretched to justify selfcentredness and self-interest at the detriment of others.

More worrying is that the de-coupling of obedience to God and pursuit of one’s survival on the one hand, from genuine concern for others, on the other. This is the bane of modern life, a life that strives to forget that we are all co-travelers on this planet and the well being of each and every individual is inextricably linked up with the well being of others.

the world. May the abiding joy of this season sustain us in this holy effort – Amen.

Given on Friday, March 19, 2021, the Solemnity of St. Joseph at the St. Joseph Cathedral