The Catholic Bishop of Awka Diocese, Most Rev Paulinus Ezeokafor, has given his vote in support of the proposed Electronic Voting (E-Voting) in Nigeria, saying that electronic transmission of votes would guarantee credible election in the country.

He insisted that E-Voting was the best option for Nigeria, as it would according to him prevent flaws and bring about credible electoral process which would represent the intention of the electorate. 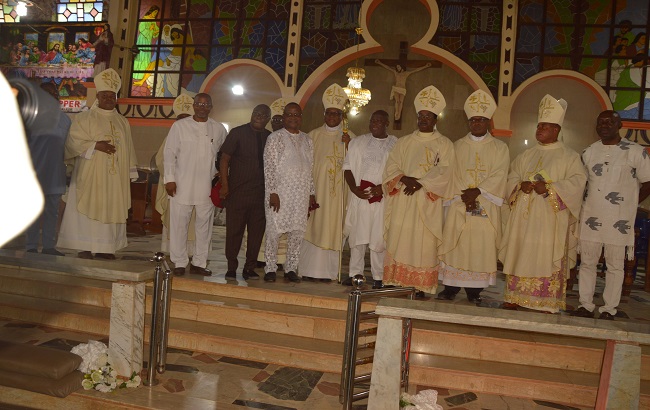 The Catholic prelate, berated Nigerian senators, federal legislators and others, who were against the electronic voting for the action which he said, was inimical to the progress of the country.

He observed that most of political officer holders assumed their various positions through fraudulent means, and their contention against electronic voting was to enable them create opportunities to thwart the process of credible election.

Bishop Ezeokafor wondered why the senators and the legislators would be kicking against electronic voting when money transactions, examinations and other transactions in Nigeria were carried out electronically.

Recalling that votes were transmitted electronically during the June 12, 1993 Nigerian Presidential Election between Moshood Abiola and Bashir Tofa, the bishop, urged the Federal Government to ensure that an improved network system was in place for the electronic transmission of votes come the next general election.

He enjoined the Nigerian Government to support the electoral umpire in its readiness to conduct credible election using the E-Voting system so as to restore peace and progress in the country.

According to the bishop, the Independent National Electoral Commission (INEC), had through its Director of Voter Education and Publicity in a TV program that was aired on AIT on July 21, 2021, explained that the Commission had what it would take to transmit votes electronically. He thanked the director, who he said, noted that the many litigations in court were due to election flaws for his insistence that the right thing be done in Nigeria.

Bishop Ezeokafor, advocated for honest and reliable people in public positions for the wellbeing of the masses and good of the country. This was even as he called on all to pray for Nigeria to enable the E-voting system to come to limelight.

The Catholic prelate, who also cited the case of Obi Cubana, who was said to have spent 12 billion Naira in his mother’s burial, called on the government to cut down such wasteful spending.

Basing his reflections further on the readings of the event (Sirach 50:22-24, Colossians 3:12-17 and Luke 17:11-19), Most Rev Ezeokafor, tasked all on life of love, compassion, peace and kindness. The bishop, likened the story of the ten lepers, who were cured and only one appreciated God to the life of most people who he said, never appreciated God for the blessings they received.