While some Catholics still have their faith threatened by the battle against the rights they have to dust-to-dust rites in some towns in Igbo Land, the Bishop of the Catholic Diocese of Awka, Most Rev Paulinus Ezeokafor, has said that the Diocese maintains her stand on the 2017 Synod Acta on the issue of faith, reports Ifeoma Ezenyilimba.

Bishop Ezeokafor, who stated this in an interactive session he had with the parishioners of St Mark’s Parish, Abagana, Njikoka LGA, Anambra State, on February 19, to mark his two-day pastoral visit at the parish, insisted that the decision of the Church that every Catholic faithful be given full Catholic burial rites would stand.

He kicked against mixture of Christian and pagan burial rites at the burial rites of every Catholic faithful.

While highlighting other fallouts of the interactive session in his homily of the pastoral visit Mass on Sunday, February 20, the Catholic prelate advised against inactiveness of married men in the Catholic Men’s Orgnaisation (CMO) of the Church.

He called on parents to encourage their sons and sons-in-law who have wedded in the Church to join the CMO to inject young blood into the organisation and keep the group alive.

Bishop Ezeokafor equally called for proper formation of the children and stressed the need for parents and guardians to give their children and wards good foundation at their early developmental stages of nursery, primary and secondary school education. 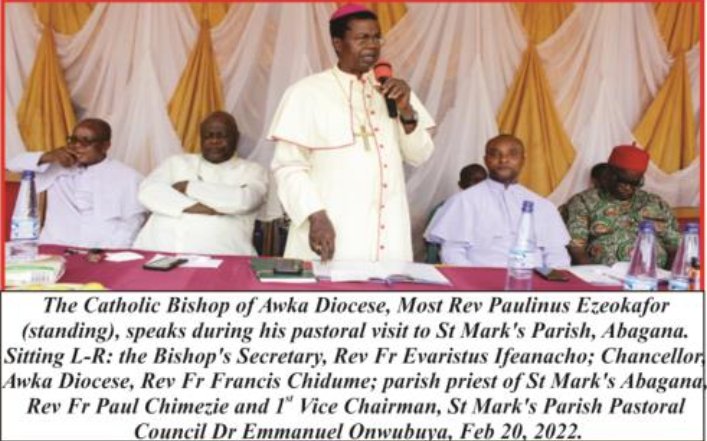 The Catholic prelate, who further based his reflections on the readings of the Sunday, tasked all on life of compassion, forgiveness and love, especially towards their enemies.

Pointing out that it was difficult for one to forgive an enemy, the bishop however noted that such model forgiveness depicted ideal Christianity and advised all to be compassionate, just like their heavenly father, and learn from the story of Saul and David, where David had the opportunity to kill Saul, but in forgiveness saved his life.

He berated those, who, according to him, often said they had scores to settle with others in heaven, saying that such case settling belief did not exist in heaven. The bishop observed that such people who planned for such settlement in heaven indirectly said they would not make it to heaven.

‘As Christians we should forgive just a Christ forgave those who crucified him and Stephen forgave those who stoned him to death. Christians should forgive and pray even for their enemies. Strive for that peace which seeks for the good of others and love which conquers hatred. Learn to bury the hatchet and return good for evil, as anything in the contrary would worsen the situation,’ the bishop advised all.