Dress Code in the Church

I listen to people argue on what kind of dress that we should allow inside the church and the ones that should not be allowed. It is interesting to know that the people arguing that we can wear anything to church did not agree on going to bed with a suit and tie.

The dress code is as old as human culture and the advent of clothing. When there is a royal celebration in our community, we all know that the king will not show up in Levi’s jeans trousers with a t-shirt and a face cap to match. Neither should we expect a judge to show up in the court with his Manchester United tee-shirt. Therefore, there is always a dress code.

Our churches should not be a place of indecent mode of dressing. Although people would argue that the dressing is not important but what is going on in your mind. Let me be quick to remind those cynics that what you see affects what you think. There is nothing in the intellect that would not first appear in the senses. A bad mode of dressing is a distraction to the onlookers. 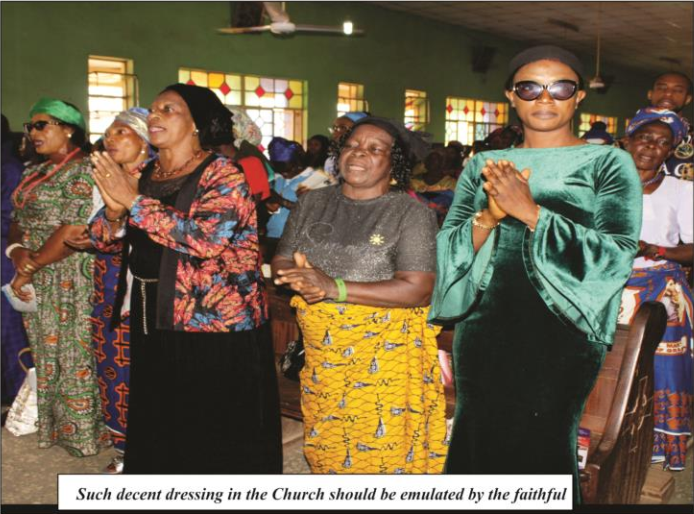 The person wearing a dress that is contrary to the code expected of him/her is a misnomer within the construct he finds himself. There is one main reason we go to church every day. Moreover, there are other reasons why we go to church on Sundays. The first reason is to worship God and build up our relationship with Him. On the other hand, we can have the other group of interested parties that go to church for many things that are not bad but not good reasons.

The church is a place of worship, not a place for showing off. The dress code in our churches today is fallen. Ladies do not cover their heads with head-ties. Nobody is bothered about head-ties because they have nothing to do with our spirituality but when you start to compare head-ties to half-nudity I stand to disagree.

Our culture has given us a clue locally on what to wear early enough when they said, “Sunday clothes and stay home clothes.” (Akwa eji eje uka na akwa eji ano na uno).  We grew up knowing the mode of dressing for Sunday celebrations bought by our parents with or without our consent. It was normally new and fanciful. It was an effort by our parents to make us look like the rest of the kids without an inferiority complex.

Today, society has grown so big and we have copied so much from western civilization. We watch the social media and we see all kinds of clothes flashing on our faces. Most of the clothes we see on social media are not meant for the church.

They are for social media and social events, but those clothes are finding their way into our places of worship. The culture of nudity is ravaging our society and the Church should stand in breach of this trend of the nudity-dress code, not only in the church but in society at large.

While growing up in Onitsha many years ago we were not allowed to leave the house without presenting ourselves to our parents to give us a go-ahead order on our looks before we appeared in public. It is a moral-based second opinion but also a social imperative to adhere to the code of dressing.

I dressed up for catechism classes at Sacred Heart Parish, Odoakpu, Onitsha and I went to my mother to inform her of my departure. And she asked me, “Where did you say you are going?” I replied, “Katikizim.” She stood up immediately and shouted that if I left the house in that dress and shoes it would be reported to my father. You may ask why?

The clothes bought for Sunday Masses and Christmas should not be worn for catechism classes which end with playing soccer in Central Primary School or Community Primary School. Sunday dresses were special and always presentable and should be treated as such.

On Sundays, we should dress not to distract others. We should consider what we wear for common worship. The Sunday gathering is the assembly of the children of God, a holy assembly. It is not a place to show off the latest designs in the market.

There are times for party and disco where some of those dresses that bring out the best in us are appreciated. The Church should not be ashamed or shy to point out to a person that wears a disco dress to church that he is in the wrong place. If the culture of the Church is to help society to become more and more modest, the Church should not fall into the culture of indecent dressing within the holy assembly. If we can dress well to play soccer, dress well in our medical coat, legal regalia, and so on. Why not dress well to worship God inside the church?