The Permanent Secretary, Ministry of Culture, Entertainment and Tourism, Dr. Laz Okafor, has been conferred with the highest chieftaincy title of Dike Ejiamatu I of Eziowelle Community by the traditional ruler, HRM Igwe Michael Ugobelunorji Okonkwo Etusi, Owelle of Eziowelle. 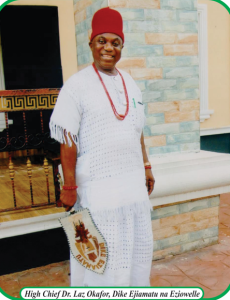 Dr. Okafor, an indigene of Eziowelle Community in Idemili North LGA, Anambra State, became a high Chief of the community following the conferment of the title on Friday, September 23, at Owelle’s Palace.

Fides gathered that Dr. Okafor who had been an Ozo title holder with the name of Nwakaibie of Eziowelle Community, was decorated as a high chief alongside three others who had distinguished themselves through their service and contributions to the community.

Conferring the Dike Ejiamatu I title on Dr. Okafor, the Owelle of Eziowelle Community said the community had been taking records of the salient and unique contributions of the awardee and his general conduct in society that had brought honour and glory to the community.  He thanked God for gifting the community with illustrious sons and daughters that had transformed it to an enviable position. 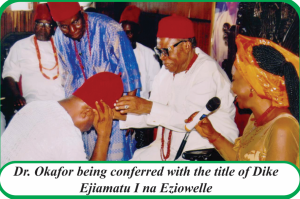 He beckoned on those who were conferred with various chieftaincy titles in the community to live up to the responsibilities bestowed on them, noting that recognition called for more work. He prayed God to protect all who had gathered at the palace and to bless the work of their hands and tasked them to be law abiding in the respective communities where they resided.

He described Dr. Laz as a shining light in the community and noted that the title of Dike Ejiamatu 1 of Eziowelle Community was in line with his integrity and peaceful disposition towards the affairs of the community and society at large. 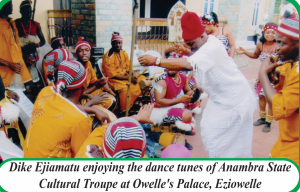 Speaking at the occasion, the Commissioner for Culture, Entertainment and Tourism, Mr. Don Onyenji, described Dr. Okafor as a noble person whom the community should be proud of owing to his style of administration that, he said, was laced with excellence. He noted that it was the good work and services of the permanent secretary towards the growth of the community that earned him the title.

Mr. Onyenji who was represented by the Director of Tourism, Mr. Emma Umeokana, stated that as a permanent secretary in his ministry, the title was in tandem with the mandate of the ministry and he enjoined other communities to liaise with the ministry for the promotion of culture, entertainment and tourism activities in the state. 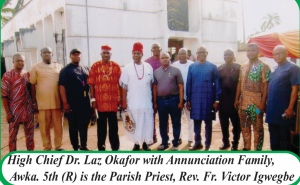 Speaking to Fides, Dr. Okafor, expressed gratitude to the Igwe and other key stakeholders in the community for taking note of what he described as his little contributions in the community and for finding him worthy of the title which qualified him to serve in the Igwe’s cabinet as a high chief. He noted that the recognition called for more work.

He enjoined every community that intended to organize any cultural activity to notify the ministry for the state’s cultural troupe to be made available to them. 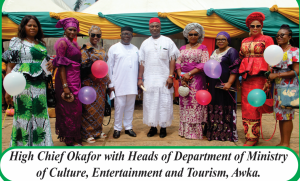 The event which also had the President of ASATU, Barr Titus Akpudo, conferred with the chieftaincy title of Ugwunyirioso I of Eziowelle, was graced by the Commissioner for Youth Empowerment, Mr. Patrick Agha-Mba; Commissioner for Local Government and Chieftaincy Matters, Mr. Collins Nwabunwanne; traditional rulers of Abacha, Igwe Godwin Odiegwu and his Oraukwu counterpart; directors from the Ministry of Culture, Entertainment and Tourism; friends and well-wishers of Dr. Okafor, among others. 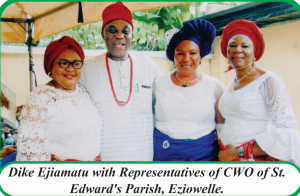