It was a somber atmosphere at the home of Dr Chike Akunyili as his remains were committed to mother earth, November 25.

The late Dr. Chike Akunyili, husband of the late former Minister of Information, as well as former Director General of Food, Drugs Administration and Control ( NAFDAC),Prof Mrs Dora Akunyili, was murdered by unknown gun men on September 28, 2021, at Umuoji in Idemili North Local Government Area of Anambra State while on his way home after receiving an award on behalf of his late wife.

Dr Akunyili, an honorary graduate, who was well known for his humane approach to his medical practice, was survived by six children and numerous grandchildren. 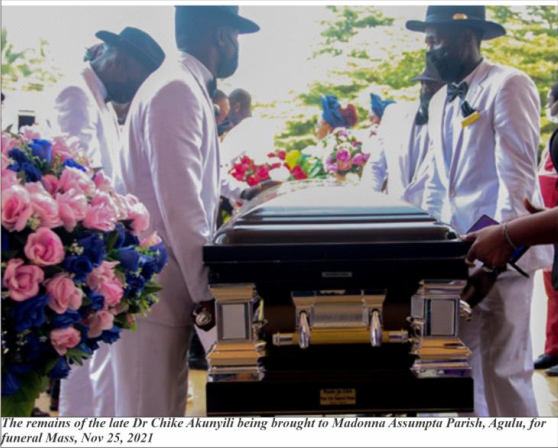 Akunyili’s interment was witnessed by such prominent guests who included professionals from various fields, business associates, government officials, traditional rulers, family and friends, within and outside the country who came to pay their last respects to the deceased and mourn with the bereaved family.

Delivering the homily at the funeral Mass at Madonna Assumpta Parish, Agulu, Rev Fr Dr Peter Damian Akpunonu, quoting from the Gospel of John; 11: 1-25, admonished all to remain steadfast in good deeds and to emulate the kind and generous lifestyle lived by the late Dr. Akunyili, noting that a life lived for others, was a life worthwhile.

His son, Obumneme Akunyili, on behalf of the family, welcomed and recognized the dignitaries present, even as he thanked those represented at the Mass. He expressed gratitude to the church for their intense support to the family all through the period of their grief and for ensuring that Akunyili got a befitting burial, being that he was a friend of the Church and a Knight of Saint John International (KSJI).

He said his late father was happy even in his death because he lived a Godly life and transferred same to his children.

Amidst tears by his children, professional colleagues, Agulu indigenes, parishioners and all others aggrieved by this loss, his body was laid to rest in this family compound immediately after the mass.

The late Dr. Akunyili was said to be a good and generous man who greatly impacted the lives of several people while alive and was involved in lots of charitable services around the country.