Sequel to its commitment to increase women’s participation and involvement in politics, the Anaocha Chapter of Dorcas Mercy Foundation and Adazi-Nnukwu women in politics has organized a seminar for women.

The seminar which was organized last Saturday, at ATDU Women’s Wing Hall, Eke-Abani, Adazi-Nnukwu, in collaboration with ATDU Women’s wing and supported by the Anambra State Commissioner for Health, had its theme as ”The role of women in the achievement of healthy political environment” and featured free medical outreach and drug administration.

Speaking to Fides, one of the founders of the associations, Dr. Vivian Paul-Mgbeafuike, said that the seminar was organized in order to educate women and instill in them the need to place values on themselves. She beckoned on the women to become more conscious, especially in the present political dispensation and always work with their conscience to prevent what happened in 2015 from repeating itself.

Dr. Paul-Mgbeafulke disclosed that the first version of the seminar had been held in July in order to encourage women and prevent them from falling into the traps of bad politicians.

She noted that the free medical check-up and drug administration was part of the association’s effort in maintaining a healthy environment and regretted the hardship which people were currently passing through. 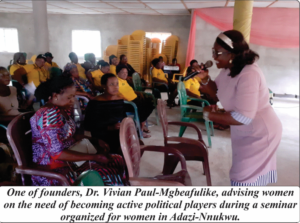 The second founder, Hon. Helen Obum Nzeka, through the address of welcome, said that the main motive of establishing the organization was to enlighten women folk on how to manage political issues and family affairs.

She said that the seminar would assist women to learn how to take care of their health and environment and inculcate in them some security tips during electioneering campaigns.

Speaking on the topic, ”Sustaining Family Unity during pre and post-election era”, Dr. Matthew Nwike, a lecturer at the Federal College of Education Technical, Umunze, described women as key players in any electioneering period, saying that they possessed the power of mobilizing their family members.

He stressed the importance of family unity and urged them to maintain peace, unity and stability, saying that family victory superseded political victory. He said that women must put their family in order and sustain their dignity during and after election era.

Exposing the women to ways of improving their health, Dr. Joy Chinelo Ebenebe said that proper monitoring of one’s body system and early detection was key to human health and longevity. He gave the women a template on how to sustain a good and healthy life style.

Presenting the topic, ”Enhancing Women’s Security in Electioneering Period”, the president of National Council of Women Societies, Anaocha Chapter, Chief Lady Vera Chikelu, urged women to be at alert and not allow themselves or their children to fall victim of election violence. She noted that it was important for them to follow procedural process and develop knowledge on the dos and don’ts of election.