Year 2022 Batch ‘B’ Stream 1 National Youth Service Corps (NYSC) members have been warned to avoid dabbling in local politics in their places of primary assignment.

Represented by the state Coordinator, Mrs Chinyere Ekwe, he urged corps members to sustain the spirit of patriotism, hard work and resilience, which they imbibed during the orientation course. 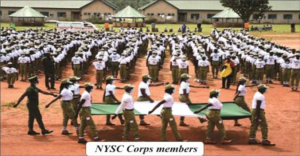 He charged the corps members to be security conscious at all times and steer clear of acts that could lead them into trouble, such as staying out late and attending night parties.

Fadah charged them to be good ambassadors of NYSC and be wary of acts that could soil the image of NYSC, especially drug abuse and trafficking, cybercrime and advanced fee fraud.

He said: ‘I enjoin you to perform your duties with diligence and be guided by the provisions of NYSC Act and bye Laws as well as workplace rules and regulations.

‘In keeping with the objectives of the scheme, you are expected to integrate into your host communities while also appreciating and respecting their culture.

‘I must, however, emphasise that engagement in their local politics is a no-go-area for you.’