One of the hallmarks of a responsible and responsive government is its ability to feel the pulse of the people it governs and this therefore means feeling their pains too and taking measures to alleviate or banish such pains.

In developed societies governments go out of their way to protect the people from discomfort and are prompt in responding to any matter that could lead to such. But in our clime, especially in Nigeria, the reverse seems to be the case. Many times members of the public are exposed to painful experiences and despite their groans and complaints, government seems disinterested or simply inured to such complaints.

In Anambra State, there have been two very noticeable instances where government appears inured to the sufferings of the people by some of their actions, even when such actions may have been taken in the interest of the public.

The first is the lingering traffic situation in the capital city of Awka which has been caused by the continued closure of the road running through Amawbia by Old Road and the front of the State Police Command to Eke Awka Market. This road was closed in the thick of attacks by criminal elements on police and correctional service centres facilities across the Southeast Zone. It was closed in Awka to forestall an attack on the police headquarters and the correctional service centre nearby.

But this had come at a great cost. Being that Awka capital city has only two major roads; one through the Enugu-Onitsha Expressway and the other through the Enugu-Onitsha Old Road, the closure of the part of the old road connecting Amawbia and Eke Awka caused people to resort to using the expressway. This in turn often triggered and still triggers massive traffic jams at peak periods. And once this happens, there is nothing anyone can do but to wait it out as there is no other way out. 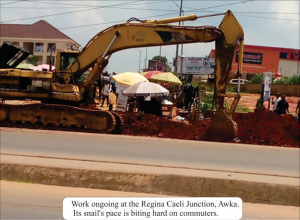 Despite a court judgment ordering the reopening of that part of the old road, the police have remained adamant on closing it, thus ensuring that the terrible traffic situation persists.

Even now that the state government is seemingly winning the war against the hoodlums terrorizing the state, and despite the fact that some police officers have turned the barricades to extortion points, the state police command and the state government have refused to fully reopen that stretch of road.

This has led to commuters still being subjected to hardship on the only other outlet which is along the Enugu-Onitsha Expressway. This is absurd as the continued closure of that road sends a signal that the police are still not on top of the security situation.

The other aspect of government’s seeming act of negligence is the practice of closing some junctions to construct drainage. The junction at Regina Caeli on the side of the road leading to Okpuno in Awka, is a case in point. It is almost three weeks since that junction was closed to traffic for drainage to be constructed but it seems it is taking the contractor eternity to do so while forcing people to seek alternate routes. But even the junction connecting that Regina axis to the express through Millennium Industries has been destroyed by caterpillars, making it difficult for commuters to go through.

These two instances do not speak well of the state government. In civilized countries, such work on any busy place is usually done very quickly in order not to cause pain to road users. But in this case the contractors are taking eternity to finish what surely is a simple task. This is not good enough.

We therefore wish to urge the Anambra State Government to look into these two issues in order to ameliorate the sufferings of people, even when it is known the government means well. Allowing these problems to linger will make many doubt the good intentions of the government.

Let the government therefore urgently look into these issues.