Not too long ago, the Anambra State Government signed a Bill on low expense burials into law. It was known as the Anambra State Burial Law. At the time, I had doubted the workability of that law and feared that it would be abused and flouted by the people, largely due to the ridiculously low fees to be paid by defaulters.

But as time went on, it happened that no one paid heed to the Law as almost all aspects of it were flouted without the government doing anything. It thus meant that the entire thing was a waste of time by those who struggled to make it see the light of day. One of such people is our bishop, Most Rev Paulinus Ezeokafor, who was worried about the amount of money wasted on according the dead befitting burials even when they did not have befitting lives.
Let’s now take another look at the provisions of the Anambra State Burial Law and see how they are observed.
__________________
Anambra State Burial Law at a glance
1. All burial/funeral ceremonies of indigenous deceased persons must be registered with the town union of the deceased persons. Registration fee is NGN1, 500.

(Note: this is one of the few provisions that have been largely observed in some communities)
2. No person must erect any billboard, banner or posters of any kind of deceased persons in the state. 100k fine or 6 months jail term or both for violation.(One may actually have a good laugh at this one as it is hugely flouted. Who doesn’t see big banners and posters of deceased people adorning major streets and roads?) 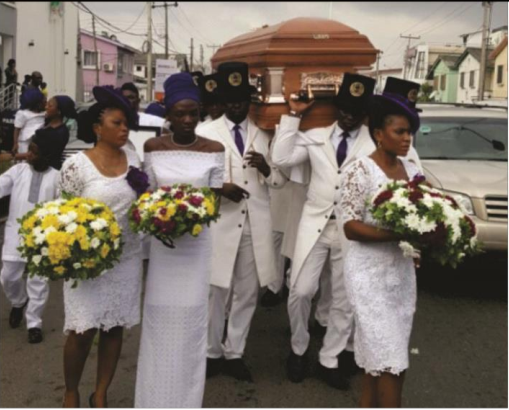 3. Persons are allowed to erect only directional posts (such as the ones leading to the venue). Must not be erected before seven days to the burial date and must be removed not later than seven days after the burial date. 100k fine or 6 months jail term or both for violation.
(This is observed in breach. Some of these signposts remain till over a month and no one has gone to jail)

4. Corpse must not be deposited in the mortuary or any other place beyond 2 months from the date of death. 100k fine or 6 months jail term or both for violation.
(This one has been faithfully adhered to by Catholic families. I don’t know about non-Catholic families. But I’m sure if those ones do not observe it, nothing has been happening as in other aspects observed in breach)

5. No blocking of road/street because of burial except with the approval of the appropriate local govt authority.
(This is where the government has been goofing. Apart from streets still being blocked, why should government even give a condition that allows people to close streets if they pay?

The other day I was about to enter a street in Awka only to see that some people had used canopies to occupy every space on the street. This is callous. So because government makes money from such, it allows people to suffer from blocked streets? Any government that allows this, whether state or local, is acting irresponsibly. Families who do not have space can go to halls to hold such activities and spare the public from unnecessary trouble)

6. No public display of casket for purposes of fabrication and sale. 50k fine or 1 month jail term or both for violation.
(This is another one that makes one have a good laugh. Was it not the other day in Nnewi that a millionaire burying his mother had hired the services of many undertakers who danced with the casket while many others dressed in white like angels gyrated behind the casket carriers?

As they moved in procession from the church to the burial place the road was blocked. Really this is a spectacle one sees every weekend in many parts of the state. Some law!)

7. Deceased family must clear outstanding levies owed to the community or religious body before the funeral ceremony.
(You can trust that this will work because it involves money. Thus expect those concerned to see that it is fully implemented)

(Another waste of time. People flout this provision all the time in the various communities)

9. All burial/funeral ceremonies for any deceased person in the state must be for one day.
(Many communities are now observing this one. Kudos to them)

10. All burial Mass/services must start not later than 9am and must not last more than 2 hours.
(The Catholic Church is doing well here. I don’t know about other denominations)

11. No preserved corpse must be exposed for more than 30 minutes from the time of exposition. It could be kept in a room under lock and key.
(Another one being observed by Catholics. Do other denominations observe this? I have no idea, even though something tells me nothing will happen to those who don’t observe it)

12. All condolence visits after any burial/funeral ceremony must not exceed one day.
(Yes, many communities are now observing this. Chukwu daalu)

13. During a condolence visit, no person must give to the deceased person’s family, as a condolence gift, any item exceeding money, one jar of palm wine, one carton of beer and one crate of soft drink.
(Akuko na egwu. People are giving more than these all the time. It is just not working)

14. No deceased person’s family must give out any souvenir during burial/funeral ceremony.
(Some people still flout this, especially the rich, and who will complain when people fall over themselves to get the souvenirs?)

15. For Ibuna Ozu Nwa Ada, there must be no demand of more than 10k by the maiden family of the deceased woman.
(I wouldn’t know about this, honestly, but I wouldn’t be surprised if it is being breached)

16. Undertakers at any burial ceremony must not exceed 6 in number. There must be no dancing with the casket by the undertakers.
(Upe! Come and see how undertakers dance owambe while carrying the caskets in their numbers)

17. Wearing of special uniform/aso ebi is restricted to: (1) immediate family of the deceased person, (2) church groups, and (3) umunna, umu ada and iyom di, where applicable.
(This is not for the rich. All they need to do is buy the uniforms and give to people and that’s it)

19. No burial on any local market day of the town. For Nimo, no burial on Oye Market day.
(I happen to be from Nimo and even before this Law, no one dared fix a burial on Oye Nimo Market day and I believe it is so in many communities. This is obviously working as it affects the livelihood of people. By the way, I’ still wondering why Nimo was singled out)

20. Umuada of the deceased person’s family must stay only on the day of the Wake and the burial/funeral.
(Wouldn’t know about this as I’m not a traditional man)

21. No more custom of Ndi Youth demonstrating with the picture of the deceased person within the town.
(Youths demonstrate with pictures of the dead all the time and everywhere. They also obstruct traffic and extort money from people. Some people have even been robbed of their possessions by such youths)

22. No destruction of cash crops, economic plants, household utensils/ properties by Ndi Youth, condolence visitors, masquerade or any other person.
(Another provision not heeded, especially when a youth is being mourned)

23. No use of any type of guns except Nkponana.
(In a land where people like to show off their wealth you can bet that this provision will not be heeded. If they don’t fire their guns how will they be noticed?)

24. No brochure of the deceased person except for Order of Mass/service.
(This one is being adhered to by both Anglicans and Catholics. Kudos)

25. All condolence registers during any burial/funeral ceremony must be kept at a convenient corner on the premises.
(This is an easy one to comply with. No issues)

26. There shall be no second funeral rites after burial except in the case of legacy.
(Traditionalists won’t listen to this. It is being breached at will)

27. Commissioner for Lands is required to create state burial grounds in every community. Rejected corpses and unidentified corpses will be buried there. A “rejected corpse” is a corpse deposited in a mortuary for more than two months. Every mortuary attendant is bound to report to the Ministry of Health any corpse that has stayed beyond one (1) month from the date it was deposited. Failure to notify the Govt is an offence.
(I’m not sure if this is being observed and no one seems to be monitoring its observance or breach)

28. There will be Monitoring and Implementation Committees. Members will be paid such remuneration as may be determined by the town union of the town. The Town Monitoring Committee is responsible for
(1) registering all deaths in the town,
(2) giving clearance for every burial/funeral ceremony in the town, and
(3) submitting records of the implementation of the Law to the Department of Town Union and Chieftaincy Matters in the State. The Implementation Committee must be present at any burial ceremony to observe the implementation of the Law. Obstruction of the Committee is an offence and attracts a fine of 50k.
(This one is being observed as it is also a source of revenue for towns)

29. Contravention of the provisions of the Law is an offence punishable by 100k fine or six months jail term.
(How many have been prosecuted?)

30. Magistrate Court has jurisdiction to try offences under the Law.
(So we hear. Let’s start seeing some action)
From the above we can see that this Law appears to be one of those things in Nigeria that are done without a follow up. The idea behind the Burial Law is a great one which is aimed at stopping or curtailing the crass stupidity of some of us. But, as I said earlier, the fines or penalties attached to the breaching of the Law mean that the rich can always easily afford to breach the provisions of that Law.

For such a Law to work, heavy fines and penalties should be imposed. For example, those who breach this Law should be made to pay upwards of N5m. This way, no matter how rich anyone is, they will feel the pain, while the government shares the money with the communities and plough it back to the development of the state/town.
In the absence of such stringent punishment, this Law may as well not be in existence.