Disengaged Parent-Teacher-Association (PTA) teachers employed by the government of the former governor of Anambra State, Chief Willie Obiano, last Tuesday took their protest for reinstatement to the Anambra State House of Assembly.

The teachers said they were previously engaged by the Parent-Teacher-Associations of the various communities in the state before the Obiano Administration converted their engagement to permanent staff in the state’s school system.

They thus protested the termination of their employment by the incumbent governor of the state, Prof Chukwuma Soludo.

The protesters blocked the entrance of the State House of Assembly in Awka, displaying placards with various inscriptions. 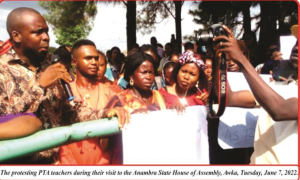 Some of their placards read: “Give us back our job”, “Why terminate our appointments after seven months of work without pay?”, “We met the criteria, we were duly employed, “Please reinstate us” and “Gov. Soludo reconsider your stand”, “Assembly please intervene and help save our jobs”, among others.

Addressing journalists, the spokesperson for the protesters, Mr Uche Eze, appealed to Soludo to reconsider his position on the termination of their appointments.

He also called on the State House of Assembly to prevail on the executive to reinstate them.

Eze said, ‘We are teachers engaged by the PTA to address the acute shortage of teachers in the state’s primary and secondary schools. Some of us had worked for over 10 years before the last administration decided to hold a recruitment and conversion exercise to make us permanent staff.

‘About 1,000 of us were shortlisted and we got our appointment letters in November 2021 to resume fully but for over seven months we have not been paid and we have just been told that our appointments have been terminated. 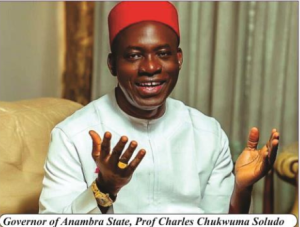 ‘We were asked to go and re-apply in the ongoing online teachers’ recruitment. This is not fair, we were not paid off and we are stranded because they are sending us back to the labour market after we were duly employed.

‘We are appealing to the Speaker of the House to use his office to intervene in this matter and help us to save our jobs,’ he said.

Addressing the protesters, the Speaker of the House, Mr Uche Okafor, promised to discuss the matter with the governor.

Okafor said, ‘We have heard your complaints and appeals. As your representatives in the assembly, we are your ears and mouth piece, so whatever affects you, affects us.

‘I want to assure you that we will speak for you by taking this matter to the governor and discussing it so that you get that which is duly yours.’