Discipline, good training and love for people and nature played a great role in making the late matriarch of the Okeke family of Etti Nanka, Orumba North LGA of Anambra State, live to the ripe old age of 110 years. One of the children of the deceased, Chief Damian Okeke Ogene, disclosed this during the funeral ceremony of his mother, Mrs Regina Okeke, Friday, September 24, at Holy Trinity Parish, Nanka. 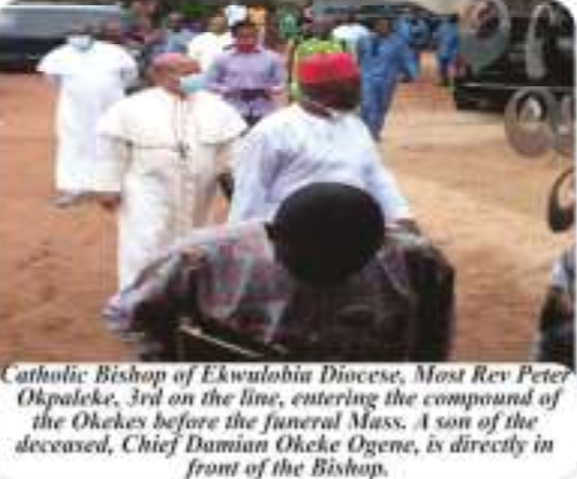 According to Damian Okeke Ogene, Vice President of Ohaneze Ndigbo Worldwide, their mother lived such an exemplary lifestyle that she never went to the hospital until the time she passed on which was the only time she was admitted in the hospital. He attributed her longevity to discipline, good training, love for people, eating of natural food, among others.

He also said their mother, whom he described as a founding member of the Catholic Church in their place, received such good training that her husband, after paying her dowry, did not see her for one year while she received home training.

His words, ‘My father only saw her when he paid her dowry after which the mission took over and trained her for one year. During that period, if our father wanted to send anything to her, he would do so through her family. Two of them never saw each other until their wedding day.’ 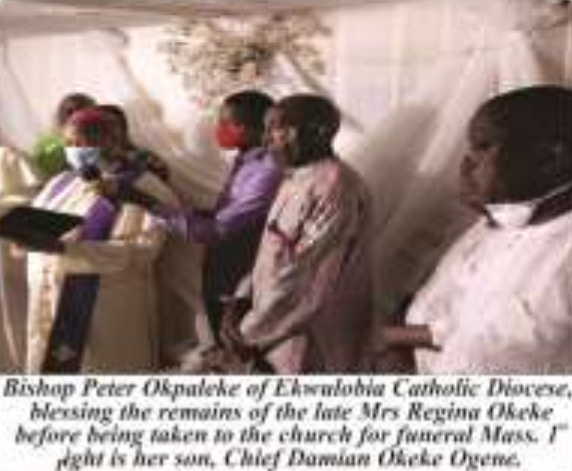 Noting that their mother never went to bed with any problem bothering her, he described her as somebody that was full of sound health and who never wore eye glasses.

‘Two weeks before she died, she had gone to the market. She worked a lot and never had blood pressure issues or diabetes. She was loved by all and never liked staying in the township because of her love for staying with her people with whom she readily shared anything she had,’ Ogene further disclosed.

Earlier, during his homily in a funeral Mass at Holy Trinity Parish, Nanka, Rev Fr Prof Anthony Chiegboka, thanked the bereaved family for their efforts in giving the deceased a befitting burial. He described the deceased’s long years (110) as a result of her good life and gift of a good family that took good care of her.

He said the faithful owed it a duty to pray for the dead, as well as bury them; even as he also said another task for the faithful was for them to join bereaved families in mourning their dead, noting that it was what one sowed that one reaped.

Fr Chiegboka harped on the need for hard, honest work by the faithful and need for the faithful to partake of the Holy Communion. He regretted that few were doing such and urged the faithful to buckle up by doing the bidding of God; just as he prayed for the peaceful repose of the deceased’s soul.

In his appreciation on behalf of the Okeke family, Chief Damian Okeke Ogene thanked the guests for honoring the memory of his mother and especially thanked the Bishop, Most Rev Peter Ebere Okpaleke, who officiated the Mass, for always availing his time to his people. 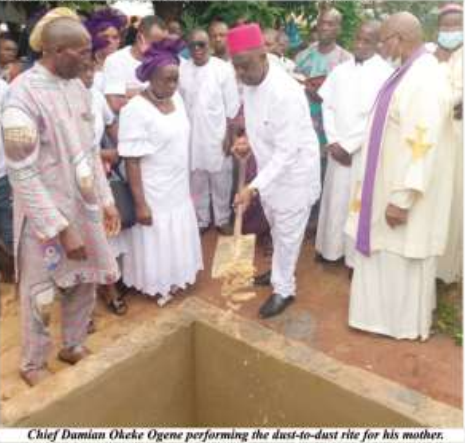 In his funeral oration later at his compound, Okeke Ogene pledged to their mother that her children would forever remain united as she had prayed, even as he extolled her for the good things she imparted to them.