Former Anambra State Governor, Peter Obi, has stated that diplomacy remains a very vital tool of governance and leadership in any society, nation or organisation.

Obi, who attended the inaugural lecture of the Anyaoku Institute for Diplomacy at Nnamdi Azikiwe University Awka, congratulated the University authorities on establishing the Institute, which, he said, would go a long way in enabling people to learn the art of diplomacy.

Obi explained that diplomacy was not just vital for international relations but also for local governance and leadership, especially in a highly populated and diverse country like Nigeria where the skills of negotiation and dialogue were needed to bring the different components of the nation together for peace and progress. 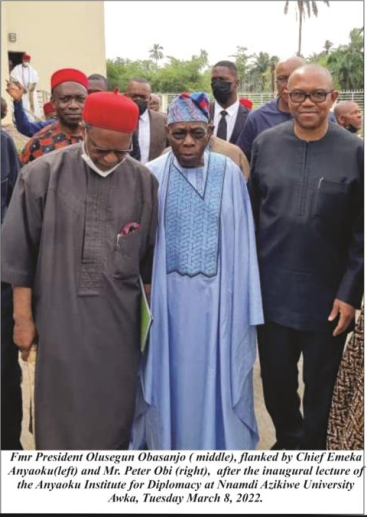 ‘Nigeria’s cohesion and trust are at their lowest levels today. In future, effective governance in the country will require specific skills to re-unite and rebuild trust among various parts of Nigeria. Consequently, skillful diplomacy, negotiation, and dialogue become the first assignments of the next incoming leaders of our country,’ Obi said.

In his remarks, the chairman of the occasion, former President, Chief Olusegun Obasanjo, said Nigeria must first look inwards and prioritise its local relationships by strengthening its political union and economic integration before considering other international relations.