The story was all over the web late last month that a Catholic priest ‘descended on’ a 70-year-old man and beat him ‘blue black’ in Adazi-Enu in Anaocha Local Government Area of Anambra State. Another version said he was beaten to coma.

The story was carried by The Punch Newspapers in its online edition of 20th February, 2016 by one Tony Okafor (http://www.punchng.com/reverend-father-batters-70-year-old-man-for-allegedly-charming-him/ ) and on its Twitter account @Punch (https://twitter.com/mobilepunch/status/700857433749528576). The news went viral on the web and social media. It became a talking point in bars, salons, restaurants and in every other joint.

People called, texted and inquired from us to know what actually happened. We decided to investigate. 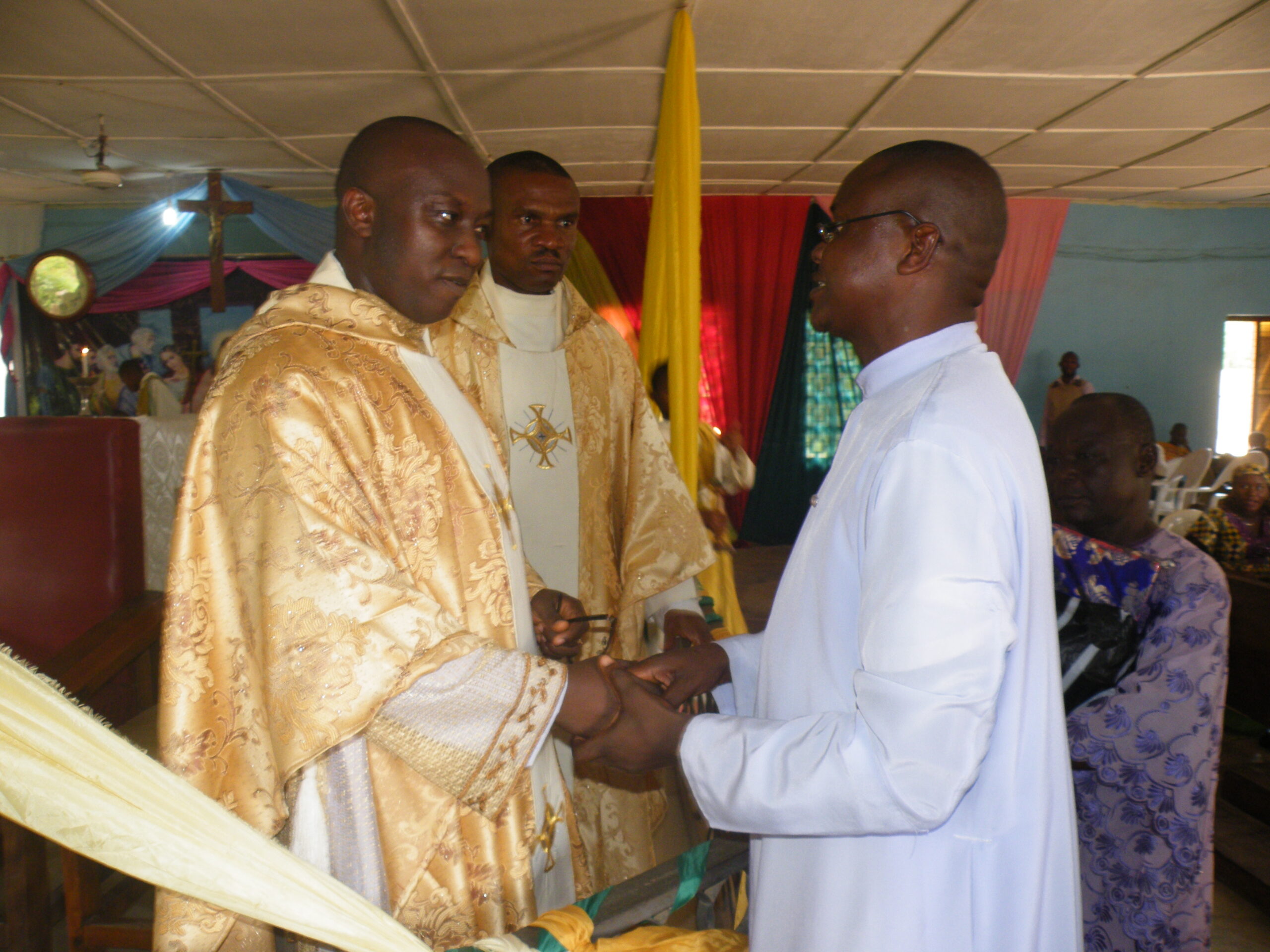 First, it is important to highlight the key points raised by The Punch report (and other online reports and across the social media).

The reports claimed that the alleged victim, Mr Innocent Nwolisa, was battered and beaten to coma, that he was 70 years old, that the reason for the beating was because the priest accused him (Mr Nwolisa) of charming him (Fr Ezeatu) while he was celebrating mass.

The report quoted eyewitness account in the person of one Arinze Ezeatu, junior brother of Fr Ezeatu. By putting the statements of Ebuka, the first son of the alleged victim, in quote, The Punch report suggested too that it had spoken with him (Ebuka) or at least had his written report.

Fides spoke with the Parish Priest of St. Dominic’s Catholic Church, Adazi-Enu, Rev. Fr Simeon Okafor, who confirmed that Mr Innocent Nwolisa came to report to him of a misunderstanding between him and Fr Mike Ezeatu on Friday, 12th February, 2016, the day of the funeral mass of one late Mrs Gloria Ifeoma Ifedigbo in Ugweni Ojii Village of Adazi-Enu. Fr Okafor told Fides the man came with his first son.

Fides then visited the alleged victim, Mr Innocent Nwolisa, in his compound in Ogweni Village, Adazi-Enu. He warmly and heartily welcomed us to his home. His conversations with Fides are on tape. He narrated to Fides what happened: that he went to greet Fr Ezeatu after the said funeral mass of the late Mrs Ifeoma Ifedigbo, and that Fr Ezeatu told him not to greet him again because, according to him (Fr Ezeatu), he was not a good man.

Later, Mr Nwolisa said he was told that somebody wanted to see him outside the compound of the funeral home. He went out with his brother, the man who had called him, and realized it was Fr Ezeatu who actually wanted to see him.

When Fr Ezeatu saw him and was trying to park his car, one of its tyres got stucked in an uneven part of the road. At that point Mr Nwolisa said he helped others there to get the car out. Then Fr Ezeatu moved with him aside and repeated what he had told him inside: that he (Mr Nwolisa) should cease from greeting him because he was not a good man. After that, Fr Ezeatu began to move away towards his car.

Then Mr Nwolisa followed him telling him that he (Fr Ezeatu) should wait and hear from him. “If you tell somebody something”, Mr Nwolisa said he told Fr Ezeatu, “you should wait to hear the person’s response.” He said Fr Ezeatu kept moving away.

What happened next? Mr Nwolisa told Fides he got back into the family where funeral was going on. He snuffed his tobacco (utaba), ate something (he said he had not eaten since morning). It was then he told his first son, Ebuka, of the incident and both went to report the matter to the parish priest, Rev. Fr Simeon Okafor. The parish priest thanked him for coming to report the matter and assured him he would try to get across to Fr Mike Ezeatu and then to the Bishop. 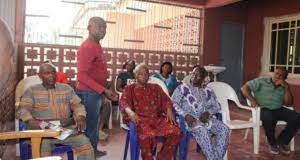 Then, what about being beaten to coma or blue black? In that conversation Fides asked Mr Innocent Nwolisa if in any way he was injured when he was pushed by Fr Ezeatu? He said he never received any scratch. He was asked again and again if he had any fall out by way of headache or anything else from that incident. He said he did not.

He was asked if he went to buy any medicine from pharmacy or treated himself or had himself treated of anything whatsoever. He insisted he never got any treatment of any kind. He repeatedly told Fides that what he had narrated was what happened and nothing more.

When Fides called his attention to the reports trending on the web, he said that neither him, nor his family had spoken to any journalist nor asked anybody to do so on his family’s behalf.

When Fides told him, his son, Ebuka, was quoted, he said he had spoken with his children and that nobody from his family told any media or journalist anything. He added, ‘How can he quote what happened since he was not there’! He said the incident happened outside the funeral compound and that his son was inside, adding that what he (Ebuka) knew was only what he himself told him.

He was then asked about the supposedly eyewitness, Arinze Ezeatu, quoted in the online reports. He (Mr Nwolisa) said that neither Arinze nor Olisa Ezeatu was there. He went further to say that both were not there even at the funeral. He told Fides that he was of the same kindred (umunna) with Arinze and Olisa and thus shared the same canopy at the funeral. “If they had come”, he insisted, “I would have seen them”.

So, how did Tony Okafor (The Punch Newspapers online reporter) or David-Chuddy Eleke (the Daily Post online reporter) and others get their information? Punch concluded its story by quoting Ebuka (Mr Nwolisa’s son) as saying his father was recovering. Recovering from what? The man in question repeatedly told Fides in more than one occasion that he never had even a headache or any bruise when he was pushed!

Daily Post reported of Ebuka (Mr Nwolisa’s first son) “who spoke to journalists”. If the family of Mr Innocent Nwolisa kept affirming, during our chat with them, that they had not spoken with any journalist or media, then comes the question: to which journalists was Daily Post alluding?. Where and when?

Fides then asked Mr Innocent Nwolisa if he would not mind telling us his age. He said he was little above 60 (sixty) years. When asked if he could be precise of what that little was: he said he was 63 years.

One then wonders who the 70-year old man that was talked about in the online reports was. At a point during the conversation with Mr Nwolisa, it was joked that perhaps the news on the web was about another incident and not his.

The parish priest of St. Dominic’s Catholic Church, Adazi-Enu, Fr Okafor, told Fides he could not reach Fr Ezeatu before he went to USA. But he eventually got across to the Bishop who was away in Ghana for a Regional Episcopal Conference of West Africa (RECOWA) Bishops’ meeting. The Bishop, according to him, said he would attend to the issue as soon as he was back from the meeting. He did.

On Wednesday, 2nd March 2016, the Catholic Bishop of Awka, Most Rev Paulinus Ezeokafor, sent a fact-finding team from the Diocese to meet with Mr Innocent Nwolisa, the parish priest and some members of the parish community.

It is interesting to note that lay parishioners present at the session with the Bishop’s fact-finding mission team included an eyewitness present at the incident on that 12th February, Mr Tochukwu Onuorah. He said Mr Nwolisa held Fr. Ezeatu’s hand to call his attention as he was moving to his car. That was what led to the push, he concluded.

First, Fides asked Mr Ejike Okoye, the eldest brother of the late Mrs Ifedigbo at whose funeral the incident occurred, whether the said Arinze Ezeatu (supposedly eyewitness in the online reports) was present at the funeral of his sister. He confirmed what he said to Fides and what Mr Nwolisa had said the day we met him in his home: that neither Arinze nor Olisa Ezeatu came for the funeral of his sister.

Fides did also ask the representatives of the parish community present if it was true (as reported by the Daily Post version) that “people usually refuse to attend mass” whenever Fr Ezeatu was to celebrate. They expressed surprise at such an allegation.

They were asked if it was true that the priest was “known in the community as a very troublesome person” (as claimed by the Daily Post report)? This, they negated. In fact, one of the women present frowned at the accusation. She said she knew Fr Ezeatu as a young man, as a seminarian and as a priest and said there was nothing in his person or character to suggest he was a troublesome person.

Fides reached out to Fr Mike Steve Ezeatu over the phone. He confirmed to Fides that he told Mr Innocent Nwolisa to stop greeting him. On the incident that happened at the funeral of the late Mrs Ifedigbo he told Fides he pushed Mr Nwolisa away because he was preventing him from getting into his car.

“He held my hand after I had spoken to him and was moving away”, Fr Mike said. He said he continued following him after that while he was moving towards his car. The push, he narrated, was because of the pestering from the man. “He was preventing me from getting into my car”, Fr Ezeatu submitted. That was when I pushed him away the second time, he said. He then took his car and left.

Having listened and heard from the two persons involved in the incident: Fr Mike Steve Ezeatu and Mr Innocent Nwolisa about what happened on that 12th February, one cannot but wonder where the news that went viral on the web came from. Was somebody or some people up for something?

The online reports raised a lot of questions. Did the reporters (Tony Okafor and David-Chuddy Eleke) write the story or did somebody else write it and sent to them? If they wrote it, how did they come about their story without contacting neither the parties to the incident nor the Parish Priest? If somebody else wrote the story, did they cross check? With whom?

Was somebody somewhere trying to cash in on the incident that occurred between Fr Mike Steve Ezeatu and Mr Innocent Nwolisa to settle some old sores? What actually was going on here? What did he or she or they intend to achieve? Who authored the news story or gave the information that their author(s) used? Fides investigation continues.