The Director General of the National Youth, Service Corps has paid a visit to the composer of the scheme’s anthem Dr. Oluwole Adetiran. The visit was predicated on the news of the ill-health of the great music legend, who composed and produced the age-long NYSC anthem.

The Director-General was received by the living music legend with joyous tunes from a group of choristers, whom “Baba” himself had nurtured over time. The colourful reception was greeted by a majestic rendition of the 3-stanza NYSC Anthem, which Dr. Adetiran himself led in an astute orchestral manner. 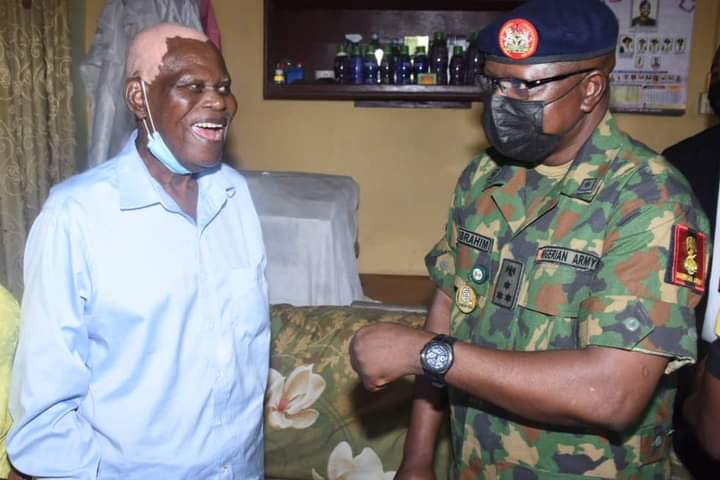 General lbrahim who was full of praise for the man who single-handedly composed what has now become a very famous anthem of Nigerian youths in the NYSC Scheme, thanked Dr. Adetiran for his invaluable contributions to the Scheme via the composition of the Anthem.

Overwhelmed by the emotions of being recognised by the Chief Executive of NYSC and the kind emotional words of the Director-General to him, Dr. Adetiran  burst into tears of joy in appreciation for the visit.

The Director-General assured him that the NYSC Scheme will continue to stand by him and members of his family at all times. The NYSC Boss prayed to God  to grant him speedy recovery and good health.

He said, ‘I am very proud to be part of the NYSC success story through the Anthem I composed. I am today fulfilled by this visit’.