Ibrahim recently gave this advise in an address during a virtual seminar with the theme, “Alleviating Hunger and Poverty through Agriculture: Today’s Youth-Tomorrow’s Leaders”, organised by Corps Members serving at the International Institute for Tropical Agriculture, Ibadan, Oyo State. 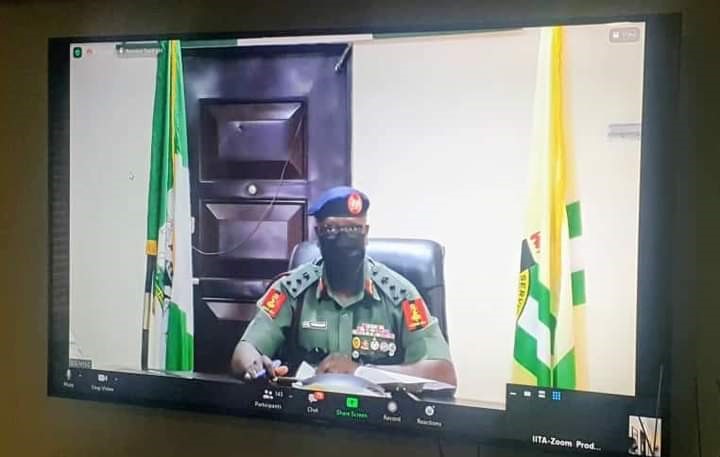 He noted that the NYSC Management seeks active participation of Corps Members in agriculture which is in alignment with Federal Government’s drive to boost agriculture, so as to diversify national economy from over dependence on oil.

Ibrahim added that NYSC has resuscitated its farms and other ventures for the impartation of skills to Corps Members, while also giving attention to NYSC Skills Acquisition programme, in order to empower Corps Members with skills that will provide them with alternative sources of livelihood after service.

He said, ‘I call on Corps Members to leverage on the opportunity provided by this seminar to equip themselves with modern trend in agriculture.’.

‘I urge you to sustain the momentum and continue to reach out to other Corps Members and youths so as to introduce digital delivery tools in agriculture,’. He added.

The Director-General stated further that NYSC Scheme would continue to provide a condusive environment for Corps Members to acquire skills through its ventures, skill acquisition programmes and collaborations with other agencies.

He commended the organisers of the seminar, adding that the synergy between the NYSC Scheme and IITA is yielding positive results that would lead to the emergence of youths that would make their mark in agro-business, thus, becoming employers of labour, instead of job seekers.

Ibrahim also urged the Corps Members to key into other youth- empowerment  programmes of the Federal Government such as the seventy- five billion Naira Youth Investment Trust Fund, National Young Farmers Scheme, Youth Initiative for Sustainable Agriculture in Nigeria and other programmes designed to ensure that youths are self reliant.

In her remarks, Mrs Hilde Koper-Limbourg , Deputy Director-General, Corporate Services, IITA Ibadan, said IITA has the mandate to reduce food scarcity while she appealed to the Corps Members to embrace agro-business that would make them wealth and job creators.